TEHRAN, Oct. 11 (Yonhap) -- South Korea fell 1-0 to Iran on Tuesday, suffering their first loss in their qualifying campaign for the next World Cup in Russia.

A first-half goal from Sardar Azmoun punished South Korea at Azadi Stadium in Tehran, and handed the visitors their first defeat in the Asian qualifying round for the 2018 FIFA World Cup.

South Korea finished the previous qualification stage with eight wins, including a 3-0 forfeit victory over Kuwait. In the final round, where they are placed in Group A with Iran, Uzbekistan, Syria, China and Qatar, South Korea were unbeaten in their first three matches.

Uli Stielike's side dropped to third place on seven points with two wins, one draw and one loss.

Iran kept their top position in Group A with 10 points, one point above Uzbekistan, which beat China 2-0 earlier in the day. Iran are the only unbeaten team in the group with three wins and one draw.

The defeat at Azadi Stadium also means South Korea have failed again to end their winless run on Iranian soil. The Taeguk Warriors now mark two draws and five losses in Tehran since making their first trip there in 1974.

Iran, the highest-ranked Asian nation at No. 37, fielded Azmoun -- who scored the winner against South Korea in a 2014 friendly -- as their target man. Former Wolfsburg and Fulham man Ashkan Dejagah supported him from behind.

Iranian defender Morteza Pouraliganji was the first player on the pitch to find the back of the net seven minutes after kickoff. His goal, however, was disallowed due to an offside.

Alireza Jahanbakhsh blasted a left-footed shot in the 11th and tapped a free kick six minutes later, but both of his attempts went over the net.

South Korea registered their first shot of the match in the 23rd, although Han Kook-young sent it wide of the post.

Iran finally opened the scoring in the 25th after Ramin Rezaeian's cross found Azmoun, who then put it past goalkeeper Kim Seung-gyu. South Korea tried to push forward for an equalizer, but Lee Chung-yong's middle-range effort in the 35th was blocked by defenders.

The visitors made a tactical change at halftime. Following Hong Chul's enterance, right back Jang Hyun-soo moved into center midfield to partner with Ki Sung-yueng and Kim Bo-kyung. Oh Jae-suk, who started as left back, took Jang's position.

The hosts had their chance to double the lead in the 60th with Saeid Ezzatollahi's header, only to see it fly over the cross bar. Jahanbakhsh's strike four minutes later was denied by goalkeeper Kim.

South Korea put 196-centimeter striker Kim Shin-wook for Lee Chung-yong in the 67th while getting ready to take a free kick. They instead blew that opportunity and fouled Jalal Hosseini instead.

Stielike made his final substitution in the 76th, with FC Augsburg attacking midfielder Koo Ja-cheol replacing Kim Bo-kyung in the 76th.

To secure their one goal lead, Iran also made their changes in the 82nd with Mehdi Taremi replacing Jahanbakhsh. Veteran midfielder Andranik Teymourian came on for Azmoun in the 85th.

South Korea were given three minutes of stoppage time, but it wasn't enough to pull off an equalizer. 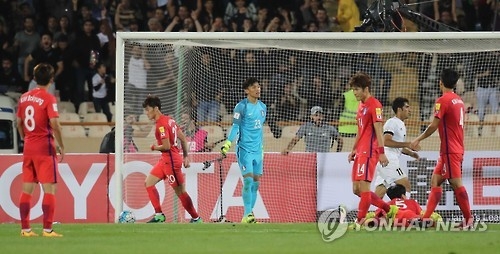