SEOUL, Oct. 12 (Yonhap) -- Coaches of South Korea's top six football clubs said Wednesday they are ready to give their best efforts in the remaining five matches to take the league's championship trophy.

The K League Classic is operating under the split system, in which the 12 teams are divided into two tiers after their first 33 matches. Starting this weekend, they will play five more matches within their groups to conclude the 2016 season.

Seongnam FC, Pohang Steelers, Gwangju FC, Suwon Samsung Bluewings, Incheon United and Suwon FC are in the lower group, or Group B. The worst team in this group will be relegated to the second division: the K League Challenge.

With an undefeated run of 18 wins and 14 draws, Jeonbuk would have easily become the champions this season, but they were deducted nine points by the league over a bribery scandal last month. The league's discipline committee punished Jeonbuk after one of their scouts was convicted on charges of bribing two referees in 2013.

With the penalty, Jeonbuk now have 60 points, just three up on FC Seoul, which have collected 17-6-10. However, Jeonbuk head coach Choi Kang-hee said he doesn't have big concerns.

"We lost points because of the scandal, but this actually stimulates our players," Choi said at a media conference in Seoul. "The five matches in the upper group are not going to be easy, but if our players perform like what they've been doing, we'll be fine."

Seoul boss Hwang Sung-hong said they want to win all five matches and lift the championship trophy in the end. Hwang took over Seoul after former coach Choi Yong-soo left for China in June.

"I think we'll be given an opportunity (to win the league)," he said. "In order to take the championship, we have to win all five matches. We'll play against Jeonbuk on the final day of the season, and I hope that match will play out like the (championship) final."

Jeju head coach Jo Sung-hwan said he feels a little relief since his club reached Group A despite some changes to their squad. Jeju are sitting third on 49 points with a record of 14-7-12.

"We had some concerns because we lost our core players and had to make changes to our squad during the season," he said. "If we can control injuries and our on-field discipline, we'll be able to reach our goal."

Ulsan, just one point below Jeju at 13-9-11, are in the upper group for the first time since 2014. Their skipper Yoon Jong-hwan, who took over the team last year, said his team will not be satisfied by just being in the top six.

"It feels different to be in the top-six group," he said. "I want to show that we deserve a spot in the AFC Champions League."

Jeonnam have qualified for the upper group for the first time in their club history after collecting 43 points with a record of 11-10-12. Head coach Roh Sang-rae said he is happy that the team is competing in the top group, but they want to go further.

"I'm not currently thinking about our final standings, but only about our performance in the upcoming matches," he said. "We have good harmony between the old and young players, and we are ready to show it all."

Sangju are the surprise team in Group A as they were considered a lower group candidate. The military club are also making their debut in Group A. They collected 42 points with a record of 12-6-15, just one point above the lower group teams like Seongnam, Pohang and Gwangju.

"There are five other strong teams in the group, but we'll try our best to play attacking football," Sangju head coach Cho Jin-ho said. "The numbers don't matter. We just have to display high quality on the pitch." 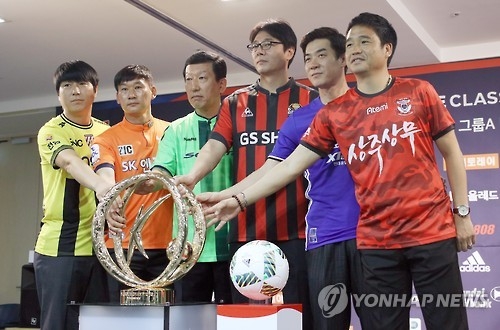