TEHRAN, Oct. 11 (Yonhap) -- South Korea traveled to Tehran to face Iran in an Asian World Cup qualifying match Tuesday, with an eye on ending a winless drought that has last for more than four decades.

South Korea instead suffered a 1-0 loss at Azadi Stadium, dropping to two draws and five defeats in the Iranian capital. And they looked pretty bad doing so.

South Korea coach Uli Stielike also talked tough on the eve of the contest, saying the goal was to make new history.

The message clearly didn't get through to his players, who were thoroughly outplayed in virtually every aspect of the game.

South Korea didn't register a shot on goal in the first half, as Sardar Azmoun scored the lone Iran goal in the 25th.

For the match, South Korea took three shots, but none on the net. Iran got 13 shots off, with four of them headed toward the goal.

Iran kept attacking in the second half, instead of sitting back to protect their slim lead. The hosts were far more efficient and crisp with their passes, and Azmoun wreaked havoc on the Korean defense with his bursts of speed.

On his scoring play, Azmoun sped down the middle of the South Korean box and redirected a perfect feed by Ramin Razeian into the net. As Razeian took control of the ball on the right wing, center back Kwak Tae-hwi watched the play develop rather than covering the charging attacker.

By the time Kwak tried to recover and stop Azmoun, it was too late.

Ironically, Stielike selected Kwak, the oldest player on the current team at 35, to stabilize the defense and serve as the calming influence in the lockers. 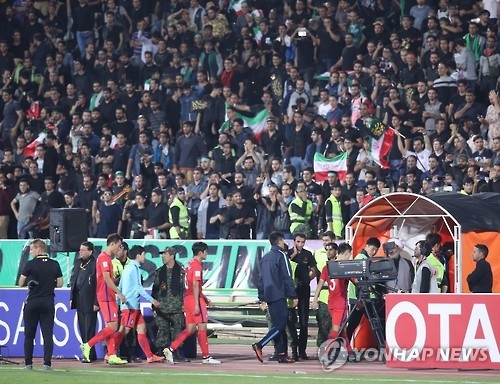 At halftime, Stielike made some changes to shake up his defense. Oh Jae-suk moved from left back to right back, with Hong Chul taking over on left. Then Jang Hyun-soo went up from right back to midfield.

And yet things didn't improve for the team as Iran remained in control. The Iranians were mostly left to do as they pleased in the Korean zone. The South Koreans put next to no pressure on opposing ball carriers, and there was little in the way of forechecking.

Oh and Kwak dodged a bullet in the 58th, when they couldn't decide who should take the loose ball and conceded a breakaway opportunity.

South Korea had given up four goals in three earlier matches. In September, they opened a 3-0 lead on China before giving up two quick ones. They were fortunate to win 3-2. South Korea actually trailed underdogs Qatar 2-1 before clawing back with two unanswered goals for a 3-2 win last week.

And Iran, the world's top-ranked Asian nation at No. 37, wouldn't let the 47th-ranked South Korea get away with similarly sloppy play.

Iran remained in first place in Group A of the final Asian qualifying round with 10 points. They have three wins and a draw, and ahve scored four times without giving up one.

Uzbekistan blanked China 2-0 and have three wins and a loss for nine points. They've only conceded one goal in those four matches. South Korea are sitting two points back.

South Korea are chasing their ninth straight Olympic berth. The top-two nations from the group will earn automatic berths and the third-place team will fall to a playoff.

South Korea will host Uzbekistan on Nov. 15, and that match is suddenly looming larger than it had been when the match was first scheduled.