Sardar Azmoun's first-half score sank South Korea in the Asian World Cup qualifier at Azadi Stadium in Tehran. Now with two wins, a loss and a draw, South Korea has fallen to third place in Group A in the final Asian qualifying round for the 2018 FIFA World Cup in Russia.

In his post-match press conference, Stielike admitted nothing went right for his side, be it "shooting, dribbling or passing."

"Our performance in the first 30 minutes was very disappointing, and I am extremely dissatisfied with today's result," he said. "Our primary goal is to qualify for the World Cup but if we play like we did today, it may be difficult to accomplish that. It hurts to admit it, but we have to credit the better team today." 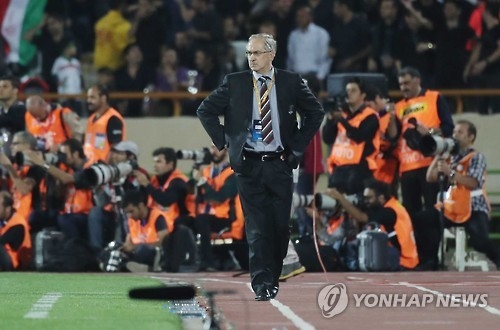 South Korea have been to the last eight World Cups. The top-two countries from Group A, which also includes Syria, Qatar, China and Uzbekistan, will earn automatic berths in Russia.

Stielike said he could have used a striker in the mold of a Qatari forward Sebastian Soria. He scored a goal and drew a penalty in Qatar's 3-2 loss to South Korea last week. Qatar actually opened a 2-1 lead before South Korea scored two consecutive goals to eke out a victory.

"I sent in (striker) Kim Shin-wook in the second half to find ways to score, but it didn't work out," the coach said. "I think it's due to the fact that we don't have a striker like Sebastian Soria."

Stielike noted how physical the Iranians were, winning the majority of the battles. That, the coach said, affected the South Koreans' collective confidence.

"I know Iran pushed us around with their physical play, but I think there's something fundamentally wrong that we still couldn't win here with new players and coaches."

Stielike came up short of identifying what those fundamental issues were. only saying that he'll go break down the game and take "a critical view on what has gone wrong."

And because South Korea were badly outplayed, he said the situation calls for "long-term plans."

"Our players tend to be smaller or weaker than the Iranian players," he added. "And it's going to take a lot of work to overcome that with solid play of our own."