(ATTN: UPDATES with other topics in last 16 paras)
By Chang Jae-soon

WASHINGTON, Oct. 11 (Yonhap) -- Both Hillary Clinton and Donald Trump won't take any options off the table in dealing with North Korea, including a strike on the communist nation, top foreign policy advisers to the two sides said Tuesday.

"The secretary and her team have made clear that North Korea is an urgent matter that requires focused American attention working closely with allies and partners," former Assistant Secretary of State Kurt Campbell, a key adviser to Clinton, said during a discussion in Washington in response to a question about pre-emptive military action against the North.

"As Secretary Sherman, Vice President-elect Kaine, others have indicated, we're not going to take any options off the table at this time," Campbell said, referring to former Under Secretary of State Wendy Sherman and vice presidential candidate Tim Kaine.

Sherman, a top foreign policy brain for Clinton, said during an international conference in Seoul earlier Tuesday that every possible tool, including military action, should be used to denuclearize the North.

Campbell spoke at a discussion organized by the Korea Economic Institute. Also attending the event was Peter Hoekstra, a former congressman who is in Trump's campaign.

"I think Mr. Trump has been very, very clear about when it comes to our national security, whether it's throughout the Middle East or whether it's in Korea, or whether it's the continuing evolving threat from Russia, that he'll do two things: He won't take options off the table and he won't release a lot of clear signals to people about at least short- and medium-term objectives as to what we may be doing," he said.

"Obviously, you have got to establish parameters in terms of where your foreign policy is operating from and what's acceptable and what's not. But I think the statement that at least as we enter into the next set of negotiations with our friends in the region as to where we're going to go, all the options at least initially are going to be on the table," he said. 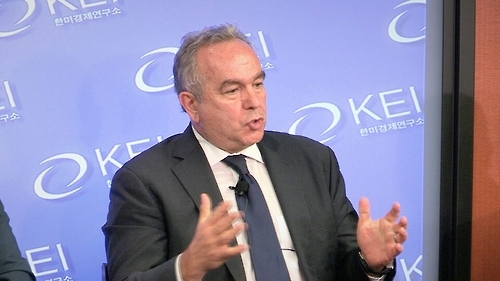 As to how to deal with the North, Campbell said the immediate focus should be "almost exclusively on tightening the sanctions" on the North, rather than trying to reopen negotiations with Pyongyang. The U.S. should also try to have a "different kind of conversation with China" to elicit its cooperation in pressuring the North, he said.

"The almost exclusive economic and commercial partner of North Korea is China. China has played a remarkable role in some kinds of interactions. We have to go directly to China and make clear that we want to work with you on these steps in terms of financial sanctions and the like, but if you have inhibitions about working with us, we're going to be prepared to take these steps alone," Campbell said.

Campbell stressed that the North's actions would ultimately translate into a real threat to the U.S.

"It is incumbent on the next president of the U.S., who I believe Secretary Clinton is well-positioned for this, to form that partnership, to make that case to China and to take those steps to make clear that the path that North Korea is on is unacceptable," he said.

Campbell also said that negotiations with the North can wait.

"Let's wait on that. Let's focus now on the activation of a much more engaged, purposeful sanctions regime that sends an unmistakable message to North Korea," he said. 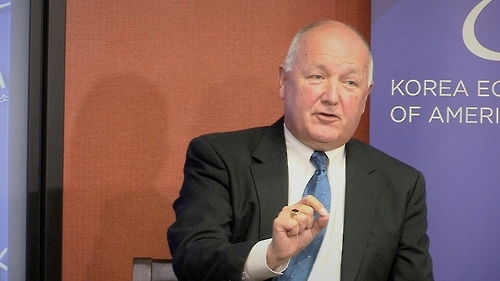 Hoekstra, meanwhile, said that the U.S. should go back to square one as to how to deal with the North and discuss with allies what the objectives are and what should be done for that goal. He stressed that the strategies employed for many years have "not developed the kind of results that we want."

"So, you really have to go back now and answer at least a couple of questions, and this is the process the Trump administration will go in early on in its presidency," he said.

He said that conducting a full assessment of the strategy, however, doesn't mean challenging the relationship or friendships the U.S. has in Asia. The U.S. should "coordinate and work with our friends and our allies to recognize what the challenges are and how we can develop a successful strategy to confront those," he said.

On defense burden sharing, Hoekstra renewed the point Trump has long made that allies should pay more.

"I think what Mr. Trump has made clear ... that they will be expected after a comprehensive review to pay their fair share, that the United States taxpayers and American workers can't be expected to pick up a disproportionate share," he said. "We're more than willing to pick up our fair share."

On the other hand, Campbell said that South Korea and Japan have been "generous providers" of support for U.S. troops, emphasizing that forward deployment of troops is in the U.S. interest.

"I would say that the calculus by which these decisions and agreements are examined has to be looked in a more holistic way. I believe the forward deployment of our forces in Asia is an enormous force multiplier for the U.S.," Campbell said.

"We do not simply do this to help protect and support our allies, although that is one of the central roles. It allows us to play a larger role in Asia. It integrates us in a way that frankly puts feet and boots and sailors on the ground and in the water that serves the strategic interests of the U.S."