SEOUL, Oct. 12 (Yonhap) -- South Korea's ruling lawmaker said Wednesday the country must develop its own nuclear weapon to better tackle Pyongyang's on-going provocations, adding steps toward the measure must immediately be made should North Korea conduct another nuke test.

"We cannot sit idle when Pyongyang is staging nuclear and missile provocations. We need to find a new methods to solve the North Korean nuke issue," Rep. Won Yoo-chul, one of the Saenuri lawmakers who openly advocate the armament scenario, said during a forum held at the National Assembly.

"The move is not to start a war. It is to protect the peace. We need to make a decision to stop Kim Jong-un's provocations and protect South Korea and its people," Won stressed.

A rising number of hawkish lawmakers from the Saenuri Party have been demanding Seoul arm itself with nukes, especially after the North carried out its fifth nuclear test on Sept. 9. Recent public opinion polls have shown large numbers of the populace in favor of nuclear armament.

The opposition bloc strongly opposes the view, adding South Korea should also consider its commitment to the Non-Proliferation Treaty, as well as its alliance with the United States.

Cheong Seong-chang, a unification researcher at the Sejong Institute and a staunch advocate of nuclear arms, meanwhile, supported Won's view, adding such a move will make South Korea much safer. He argued that developing nuclear arms will not seriously damage Seoul's ties with Washington or other neighboring countries.

"For example, China slaps sanctions on North Korea when it makes provocations. But such a tough stance is weakened in about three months' time," Cheong said, adding the international sanctions are closely connected with the interests of each countries. 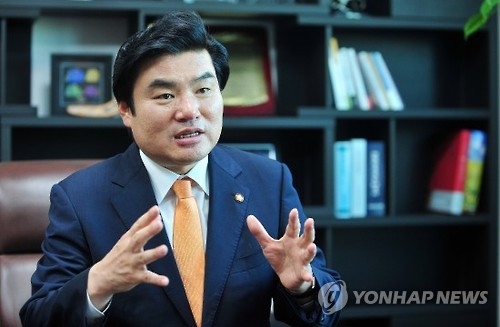