SEOUL, Oct. 12 (Yonhap) -- Rep. Lee Jung-hyun, the head of the ruling Saenuri Party, on Wednesday said last week's ramming by a Chinese fishing vessel that led to the sinking of a patrol speedboat can only be seen as an intentional violent act that requires firm action by the Coast Guard.

Lee's remark came after Chinese fishing vessels operating inside South Korea's exclusive economic zone in the Yellow Sea charged a 4.5-ton speedboat belonging to the Coast Guard while it was carrying out a crackdown operation on Friday.

"The attack was clearly intentional. The Chinese vessel collided with the boat knowing it could kill someone," Lee said, pointing out such behavior is only seen if countries are at war.

He then said the Coast Guard should have taken stronger actions against such law-breaking activities.

An official from the Coast Guard said they were unable to properly respond to the provocation because it happened very suddenly.

The Saenuri chief said the country's foreign ministry should seek to hold a high-level meeting with Beijing, as similar problems have been breaking out for some time. 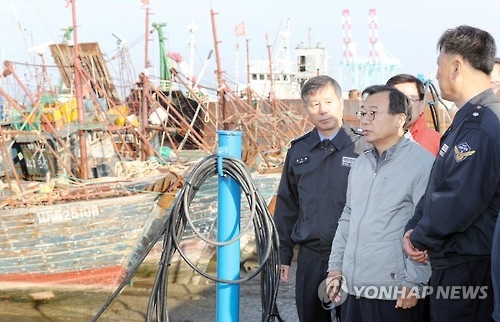