The press conference to promote the upcoming flick was held at the CGV-Apgujeong theater in southern Seoul on Tuesday.

The movie is a fantasy story about a boy who mysteriously disappears when he goes to the mountains with his friend, only to return as a full-grown adult a few days later. The only person that believes in him is Su-rin, played by Eun-su. The movie unravels on the pure and innocent story of the two lead characters.

The much-anticipated film will premiere in Korea in November . 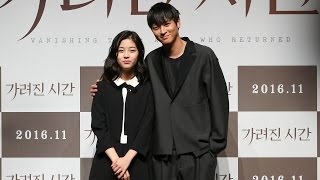