Hwang visited Bangkok earlier this week to take part in the gathering of the Asia Cooperation Dialogue (ACD), a 34-member body created in June 2002 to promote Asian exchanges. There, the prime minister said the international community must join efforts to curb North Korean provocations that threaten world peace.

"The South Korean government is cooperating with others to create an atmosphere in which Pyongyang will have no other choices but to give up nukes," Hwang said, urging other members of the ACD to lend a hand.

Hwang also met leaders from Cambodia, Myanmar and Kuwait, seeking to expand cooperation with the countries.

The prime minister, in addition, held talks with Thai Prime Minister Prayut Chan-o-cha on Tuesday. At the meeting he asked the Thai counterpart to ease business barriers to broaden economic ties between Seoul and Bangkok.

During his trip to the Southeast Asian country, Hwang focused on expanding cultural exchanges with Bangkok, visiting a local school that teaches Korean, along with other events.

He paid a visit to a Thai military unit that fought under the United Nations flag in the 1950-53 Korean War, expressing gratitude to veterans. 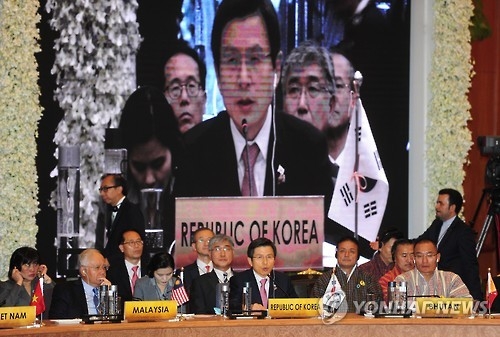