SEOUL, Oct. 12 (Yonhap) -- Two Seoul clubs -- the Nexen Heroes and the LG Twins -- will renew their Korea Baseball Organization (KBO) rivalry when they meet in the first round playoff series starting Thursday.

The Heroes finished third in the regular season and will have the home field advantage in the best-of-five set. Game 1 is set for 6:30 p.m. Thursday at Gocheok Sky Dome in western Seoul.

The Twins finished fourth in the standings and dispatched the fifth-seed Kia Tigers in the wild-card game. The Twins will get Game 3 and, if necessary, Game 4 at Jamsil Stadium in southern Seoul.

This is their first meeting in the playoffs since the second round in 2014. The Heroes knocked out the Twins in four games at the time.

The Twins won the season series 10-6 this year.

Both are surprise playoff contestants. The Heroes stayed near the top of the standings all season long despite losing some vital pieces of their lineup and staff over the offseason. MVP-winning slugger Park Byung-ho signed with the Minnesota Twins, while hard-hitting outfielder Yoo Han-joon joined another KBO club, the KT Wiz, as a free agent.

Manager Yeom Kyung-yup did more with less than anyone in the KBO, and the Heroes also got a second-half boost by the return of left-hander Andy Van Hekken, who'd left for Japan last winter after four successful seasons here and rejoined the Heroes in July. 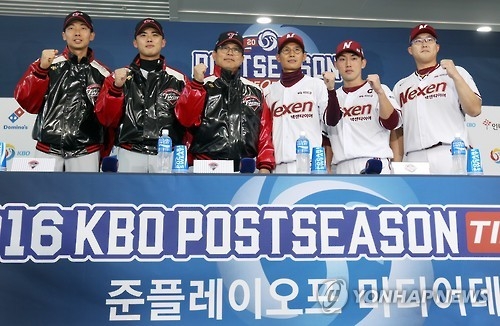 "I know a lot of people figured this would be a tough season for us, but everyone, from coaches to players, came together to get to where we are today," Yeom said at the press conference of the contestants on Wednesday. "We may be seen as underdogs in the postseason, but we'll be out there having fun and trying to play sound baseball."

Yeom said he decided to give Van Hekken, 37, an extra day to get ready for the postseason.

The Heroes get a break because the Twins have used David Huff and Ryu Jae-kuk, their two best starters, in wild-card games against the Tigers this week.

Despite losing the big bats, the Heroes still posted the KBO's second-highest team batting average with .293. They went from leading the league in home runs to slapping their way around the bases, and topped the KBO with 39 triples, 19 more than a year ago.

Their staff issued the fewest walks in the league, as the team worked on a philosophy of getting batters out on contact.

The Twins made a strong second-half surge to get into the postseason, and will look to rely on their deep bench to wear out the opposing pitching.

Their blend of experience and athleticism came in handy against the Tigers in the late innings in the decisive wild-card game Tuesday.

"I am proud of the way we battled the Tigers, and hopefully, we'll be able to build on that in the upcoming series," Yang said. "Our young players grew up so much during the season, and I think the momentum is on our side."

Both managers agreed that the series will likely be determined on small things.

"I think our strength is the ability to pay attention to details," Yeom said. "We are where we are because we've been playing fundamentally-sound baseball. We won't try anything different. We just have to execute our plays the way we've been doing all year."