SEOUL, Oct. 12 (Yohap) -- A secondary boycott aimed at penalizing those involved in trade with North Korea should be implemented to put more pressure on Pyongyang to give up its nuclear and missile development programs, a former head of a major U.S. think tank said Wednesday.

In an interview held on the sidelines of the World Knowledge Forum hosted by Maeil Business Newspaper in Seoul, Edwin Feulner, the former head of the Heritage Foundation, said that nothing should be taken off the table in dealing with the North.

Feulner is known as a renowned North Korea expert who recently joined the Donald Trump camp. He currently serves as chairman of the Asian Studies Center, a research body under the Heritage Foundation.

"China, after all, is responsible for 100 percent of energy to North Korea and something like 90 percent of foreign trade with North Korea," he added. 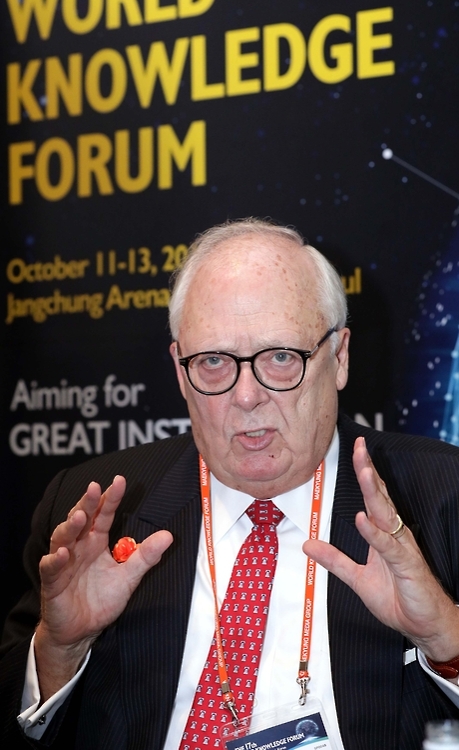 Demand is growing for much tougher action amid worries that the North is using some "loopholes" in United Nations Security Council resolutions to get its hands on hard currency and materials necessary to advance its missile and nuclear capabilities.

A secondary boycott, which penalizes foreign companies trading with a target country, has been cited as one of the most effective ways to rein in the North.

Tensions have been high since the North conducted its fifth nuclear test in early September, and it is reported that Pyongyang is ready to take any major military provocation despite multiple resolutions and punitive sanctions. The UNSC is currently working on a fresh resolution to punish the North for its Sept. 9 nuclear test.

Feulner echoed the remarks made by Wendy Sherman, former U.S. under secretary of state for political affairs and a major adviser to Hillary Clinton. She said at the forum on Tuesday that every possible tool, including military action, should be used to denuclearize North Korea.

"There are a number of things that can be done short of full-scale military confrontation, but I presume, at the same time, that we should not be predictable in terms of taking anything off the table," he added. "The North Korean regime should know that the strong alliance here is ready to meet the challenge that North Korea keeps pushing on it."

He said North Korean leader Kim Jong-un should be held accountable for not following international sanctions.

"This man is not dumb. (But) he has a weak hand. He is playing it very hard and tough. He has to be confronted to know that he can't get away with it," he said.

Asked whether pre-emptive strikes against the North are a plausible and possible option, he said that it is still "premature," but it becomes "less premature" as North Korea advances its development "more and more aggressively."

As for concerns over controversial remarks by Donald Trump demanding fair burden sharing for U.S. troops presence here and arguing that a free trade deal with Seoul is hurting his country, Feulner said that it is not unusual for a president to review policies done by the previous administration, apparently defending the views of the Republican presidential candidate.

"Cost sharing, of course, has been an issue between the U.S. and Korea going back probably 40 years. Remember when candidate Jimmy Carter said that he wanted to remove all American troops from Korea," he said.

"It is not unusual for an American president to say that there should be a review of questions like that. I think that these kinds of questions ought to be reviewed," he said. "A new administration coming in has to reexamine the whole set of circumstances."

(Yonhap Interview) Secondary boycott should be implemented to intensify pressure on Pyongyang: US expert

(Yonhap Interview) Secondary boycott should be implemented to intensify pressure on Pyongyang: US expert