GWANGJU, Oct. 12 (Yonhap) -- Asia's biggest biennial contemporary art festival under way in this southern city has received favorable reviews from foreign media, with more than 110,000 people visiting the event in the month after its opening, organizers said Wednesday.

The 11th Gwangju Biennale started its 66-day march for democracy, human rights and peace through art in Gwangju, 330 kilometers south of Seoul, on Sept. 2, with its opening ceremony attended by some 1,000 artists, government officials and diplomats.

The Biennale was founded in 1995 in memory of the 1980 pro-democracy uprising in Gwangju, and this year's exhibition features works by some 120 artists from 37 nations under the theme of "The Eighth Climate: What does art do?"

According to the festival's organizing committee, the U.S. art market website Artnet reported on Sept. 1 that "the 11th Gwangju Biennale is a thinking man's biennial, going for substance over spectacle."

In a Sept. 22 report, British contemporary art magazine Frieze described the Biennale as an event that reflects both a fantasy world and contemporary art under a complex and ambitious theme. 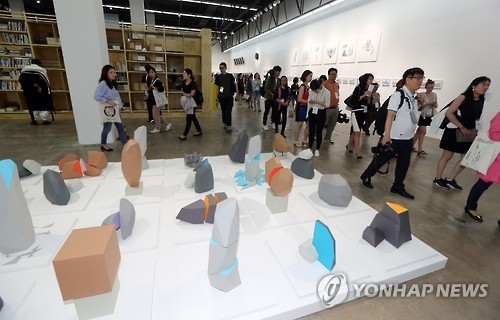 ArtAsiaPacific, an English-language magazine solely dedicated to covering contemporary art and culture from Asia, the Pacific and the Middle East, has reported that anchored by 28 newly commissioned works that were created in Gwangju itself, the Biennale explores a wide range of subjects, from past political histories to urgent environmental and social issues.

In addition, Art Agenda of the United States and other foreign art magazines have given positive reviews to the Biennale slated to end on Nov. 6.

Organizers said some 118,000 people, including celebrities and group viewers have visited the Biennale for the one-month period after its opening.

Representatives from 50 domestic art museums and several foreign ones have also visited the event that provides various exhibitions and programs in many places in the city.

Works of nine young artists, who have been selected through the event's "Portfolio Review Program," will be displayed at Mugaksa Temple until Oct. 31, and a special exhibition will be held at the Asia Culture Center until Nov. 6. A Korean-Taiwanese exhibition will also run at the Gwangju Museum of Art through Nov. 13.
(END)