SOKCHO, South Korea, Oct. 12 (Yonhap) -- The city of Sokcho on South Korea's east coast will treat around 1,300 Chinese buyers and tourists to an outdoor party of fried chicken and beer, or "chimaek," this week as part of its efforts to deepen friendly relations with China on the sidelines of an international fair, city officials said Wednesday.

Chimaek, a compound word combining chicken and "maekju," the Korean word for beer, has been a craze among young Chinese people since "My Love from the Star" aired in 2014, as a number of Chinese drama-lovers who want to eat like Cheon Song-yi, played by Korean top celebrity Jun Ji-hyun.

The party, which will take place at the Expo Park in the city from 6:00 p.m. for two days starting Friday, is expected to bring Chinese guests who will take part in a trade and investment fair of the Greater Tumen Initiative (GTI), a regional cooperation body involving South Korea, China, Russia and Mongolia. The GTI is aimed at developing areas near the Tumen River between China and North Korea.

Fourteen companies operating in a tourist fishery market in the coastal city will provide the chicken, beer and other drinks to the party.

The trade and investment fair, set to open Thursday, is expected to bring together 3,000 businesspeople from about 600 firms of South Korea, China, Russia, Mongolia and six other Asian countries. 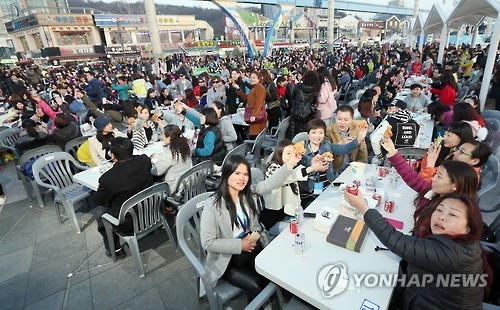