Hanawon, a facility in which defectors receive three months of resettlement education after coming to the South, said 35 percent of the defectors surveyed in 2014 said they escaped their homeland to seek liberty, marking a sharp rise from 9.6 percent tallied in 2001.

The portion of defectors making the decision to meet their families also climbed 22.9 percent from the previous 15.2 percent, it added. Another 17.5 percent said they escaped from the North due to the discontent against the communist system, compared with 6.2 percent posted earlier.

Hanawon added around 30,000 North Koreans have fled to the South since 1999, with women making up 78 percent of the total.

The defectors are provided with various educational programs to help them settle here, including vocational training, as well as consulting services.

Earlier this week, President Park Geun-hye said she will build "sufficient" capabilities to accommodate North Korean defectors, adding they are a "testing ground for reunification."

During her speech on the country's Armed Forces Day on Oct. 1, Park also said South Korea will help defectors "find hope and new lives" here, lending a hand to North Koreans escaping from the communist regime. 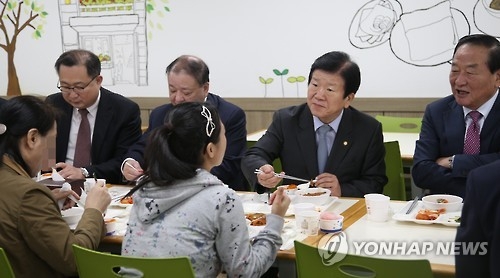