SEOUL, Oct. 12 (Yonhap) -- He may have wrapped up his first major league season as the closer for the St. Louis Cardinals, but South Korean right-hander Oh Seung-hwan said Wednesday he doesn't feel he's guaranteed the same position next season.

Oh held a press conference at a Seoul hotel after returning home from a largely successful rookie year with the Cards. Oh began the season as a setup man but took over from struggling former All-Star Trevor Rosenthal as the ninth-inning guy in July.

Oh, the all-time leader in the Korea Baseball Organization (KBO) with 277 saves, recorded 19 saves for the Cards, along with a 6-3 record and a 1.92 ERA in 76 appearances. He struck out 103 in 79 2/3 innings, and was among the league leaders in relief innings pitched and appearances.

"It was a great honor to be a major leaguer, which had been my goal as a baseball player," Oh said. "It's disappointing that the club missed out on the postseason, but I am happy that I was able to contribute to the team."

The 34-year-old had spent the past two seasons with the Hanshin Tigers in Japan and recorded 80 saves there. He's the first South Korean to record a save in South Korea, Japan and the United States. 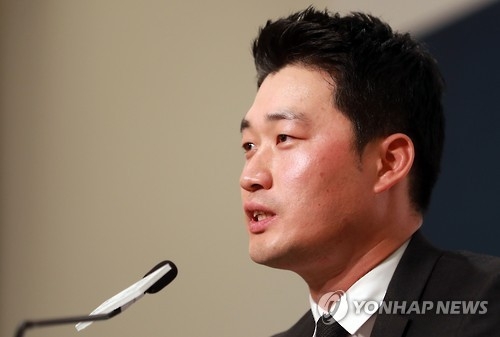 "I am especially proud of finishing the season with an ERA under 2.00, and even my father told me he didn't think I'd do so well," Oh added. "It would have been nice to get to 20 saves though."

Rosenthal never got his old job back the rest of the season, and Oh is widely regarded as the Cards' closer for next season too.

Oh may be one of the few to disagree with that assessment.

"I've seen articles that said the club sees me as the closer next year, but I don't think anything is fixed," he said. "I'll have to compete again in spring training. I know the coaching staff will look at this year's stats, but I'll go out there and compete with a lot of others."

Oh said he was slowed a bit later in the season by a thigh injury and said he hopes to stay healthier in 2017.

The right-hander may just be the best South Korean relief pitcher today, but he was left off the 50-man, provisional national team roster for next year's World Baseball Classic (WBC).

Oh would have been a controversial national team pick because of his off-field issues. He was fined by a South Korean court on illegal overseas gambling charges earlier this year, and the KBO slapped him with a 72-game ban, which is to take effect if he rejoins the domestic league.

The national team manager Kim In-sik faced strong backlash last month when he hinted that he was willing to look past Oh's gambling history to put him in his bullpen.

Under the WBC rules, players not already on the provisional roster may still be named to the final roster.

"I have to accept the KBO's decision," Oh said of his omission. "I am not disappointed by the exclusion. But if I get the chance to play at the WBC, I'll do the best I can."