Lotte Mart's Seoul Station branch, which is most frequented by Chinese travelers, said dried seaweed purchases by Chinese nationals jumped 78 percent from 2012 to 2015, without elaborating on the exact sales figures.

Dried seaweed pressed into a dark green sheet is called "kim" in Korean, and they are usually roasted with sesame oil and fine salt to be served as a side dish in traditional Korean dining. They also serve as condiments, snacks and main ingredient for rice rolls. 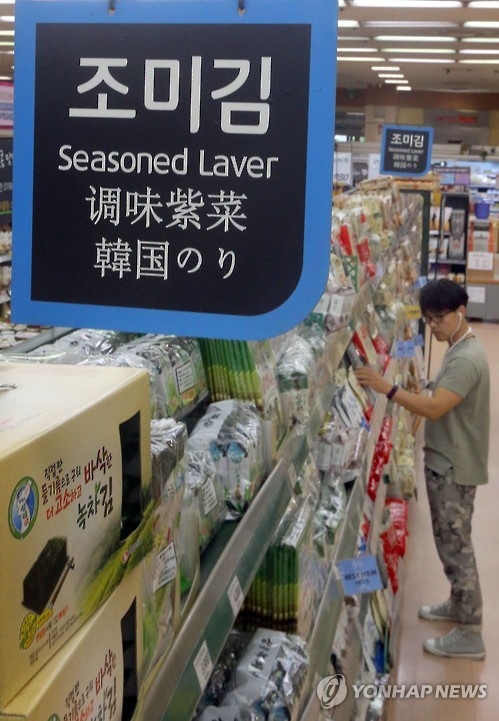 While popular Korean dramas have boosted sales of local food among Chinese customers, dried seaweed has become one of the most preferred gift items as they are relatively cheap, light and easy to store, according to officials.

"Chinese travelers usually buy 12-pack packages to give them as gifts to their friends and relatives, accounting for the biggest portion of laver sales," an official at Lotte Mart's Seoul branch said. "Roasted, salted laver sheets and other processed products are boosting overall sales."

While sheets of seasoned laver are the best-selling item, sales of laver snacks have also grown to account for about 30 percent of total sales last year, Lotte Mart said.

South Korea exported US$300 million worth of dried seaweed in 2015, surpassing the mark for the first time, according to the Ministry of Oceans and Fisheries. The amount was also triple that of 2010, making dried seaweed the second-most exported Korean seafood after tuna.