The main customers of the prepackaged meals at Incheon International Airport's supermarkets used to be Korean who bought them for their travels overseas, but the ratio of foreigners has sharply risen over the past few months.

Ourhome, a main food producer, said sales of home replacement meals at its two food markets at Incheon airport have risen an average of 14 percent from January to August. 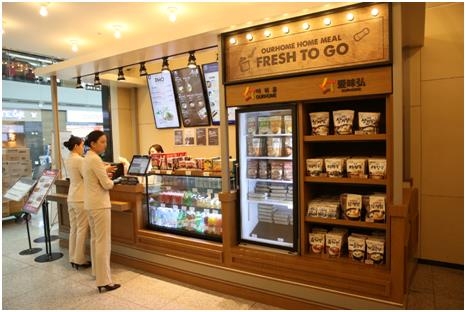 Sales of prepackaged beef mushroom soup and abalone soup, which are known as "Korean appetizers," have rapidly grown, and seasoned seaweed products are among the most popular items, it said.

Samgyetang, chicken soup made with ginseng and garlic, has become an instant best-seller after it appeared in a massive hit Korean television series, "Descendants of the Sun," which aired in February and April.

Officials say more options for easy-to-cook meals available at the airport supermarkets have been attracting foreigners because they provide special bags for the food items to allow them to pass through security checkpoints.

"We had more local customers who wanted to have Korean food during their travel in the past, but the growing interest in the traditional Korean food is boosting demand among foreigners," an official at Ourhome said. "We plan to release more products to introduce various tastes of Korean food."