The "K-Musical Road Show 2016" will open Wednesday night for a two-day run, according to the Korea Arts Management Service (KAMS), a government-affiliated public foundation. It added the event was timed for the Oct. 11-16 period of the Shanghai China International Arts Festival Performing Arts Fair (ChinaSPAF).

ChinaSPAF is acclaimed to be the most influential international event of its kind in the country and a significant platform for overseas performing arts sector counterparts to enter into the Chinese market.

Eight original local musicals chosen through an open call will be shown to participants in the fair. The eight include "The Musical Hero," depicting the life of An Jung-geun, a renowned Korean independence activist; "Arirang," an adaptation of novelist Jo Jung-rae's epic novel; "Sherlock Holmes," which swept the musical awards in Korea in 2011; "Mata Hari," this year's mega-hit; "My Bucket List," a musical comedy; "Vaya con Dios," which is based on a German film that portrays a journey of monks; and family-oriented musicals "Cloud Bread in Playground" and "Cat Zorba."

In addition, KAMS will utilize visual materials to promote the productions and install a promotion booth to develop further cooperation of those in the performing arts market of the two countries.

"We will continuously find ways for Korean stage musicals to tap deeper into the Chinese market," said an official from KAMS. 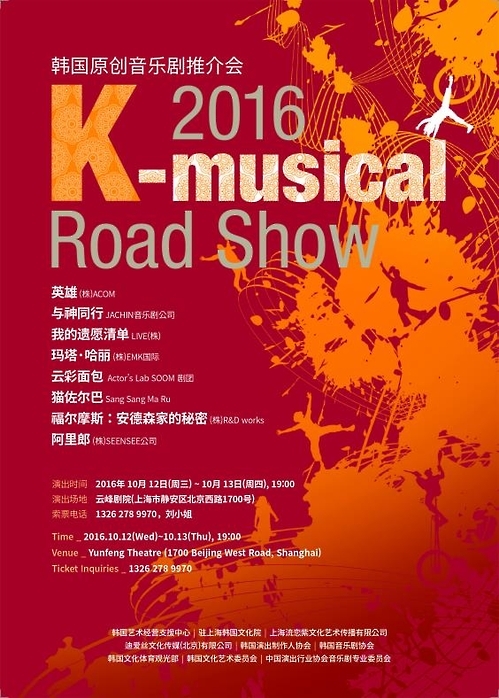