SEOUL, Oct. 12 (Yonhap) -- Samsung Electronics Co. said Wednesday it has revised its operating profit estimate for the third quarter down to 5.2 trillion won (US$4.6 billion), hit by the permanent end of the Galaxy Note 7 smartphone.

Samsung had previously estimated that its operating profit for the July-September period may stand at 7.8 trillion won.

Compared with a year ago, the revised estimate of third-quarter operating profit plunged 29.63 percent.

The revised earnings guidance came a day after Samsung announced that it will stop manufacturing the Note 7s because of continued safety concerns. 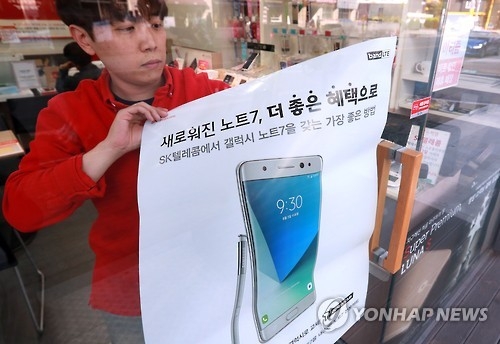 An official at Samsung said the latest estimates for operating profit and sales "fully reflected direct costs of a decision to discontinue the Galaxy Note 7."

"Amid the recent fire cases involving the Galaxy Note 7, Samsung decided to stop production and sales of the Galaxy Note 7 because consumer safety remains our top priority," Samsung said in a statement.

The revised operating profit estimate of 5.2 trillion won would be the lowest quarterly profit since the third quarter of 2014.

Market observers expected the Note 7 fallout to cost as much as 3 trillion won.

Samsung announced a global recall of 2.5 million Note 7s in early September after some of the smartphones caught fire.

As some of the replacement Note 7s reportedly caught fire as well, Samsung decided to permanently end production of the devices.
(END)