SEOUL, Oct. 12 (Yonhap) -- The importance of saves and the usage of closers have become subjects of much debate between the sabermetrics community and more traditionally inclined baseball minds. And yet there's no questioning the magnitude of getting the final three outs of a postseason game and slamming the door shut on the opponents, no matter who's on the mound.

For all the analytical talk on the viability of inserting the best relief pitchers in high-leverage situations in earlier innings, most teams still go with their top bullpen arms in the ninth inning. And during the first-round playoff series in the Korea Baseball Organization (KBO) between the Nexen Heroes and the LG Twins that opens Thursday, closers for the respective clubs will most likely find themselves on the mound in the ninth -- high leverage or not.

And Nexen closer Kim Se-hyun wouldn't have it any other way. 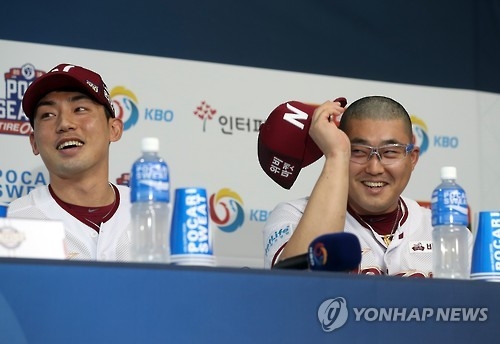 "I can't help the nerves, but I am going to try to enjoy this experience as much as I can," said Kim, who led the regular season with 36 saves in his first year as the closer. "Whenever the team needs me, my job is to pitch. I can pitch in the eighth inning, too, as long as I can help the club win."

In the opposite bullpen, the Twins will count on the 25-year-old Lim Jung-woo to preserve victories. He finished second behind Kim with 28 saves, also as the first-time closer, while recording a 3.82 ERA in 70 2/3 innings. He fanned 87 but issued 36 free passes.

Lim and the Twins had to fend off the Kia Tigers to take the wild card and earn the right to play the Heroes this week. On Tuesday, Lim entered the scoreless affair in the top of the ninth and retired the side in order, setting the stage for a 1-0 walk-off win on Kim Yong-eui's sacrifice fly in the bottom ninth.

While Kim Se-hyun admitted to feeling some nerves, Lim said his concern was actually not getting nervous at all.

"I thought I'd battle some butterflies in my stomach, but I felt really comfortable out there," Lim said of his Tuesday outing. "I will need to feel some tension to stay focused. But I am confident against anyone."

Kim said he can overpower hitters with his fastball. He averaged 148 kilometers per hour (92 miles per hour) with his four-seamer this year, and has touched 94 mph. He's essentially a two-pitch guy, mixing in fastballs (71 percent usage) with sliders (23 percent).

As the older of the two, Kim said his experience and mental fortitude should also be great assets come postseason.

Lim said while he doesn't throw as hard as Kim, he can fool hitters with breaking balls. He averaged about 89 mph with his fastball, but only used that pitch 45 percent of the time. The right-hander threw sliders, curves and splitters to great effect.

"I think I can throw sliders against left-handed batters," he said. "I'll be attacking the batters."

While Lim, a sixth-year vet, is not as seasoned as Kim, he said going through a rough patch in June helped him become a better pitcher.

But he bounced back strong in July and August. In August in particular, Lim was 1-0 with eight saves in a dozen games, while striking out 22 in 14 1/3 innings. 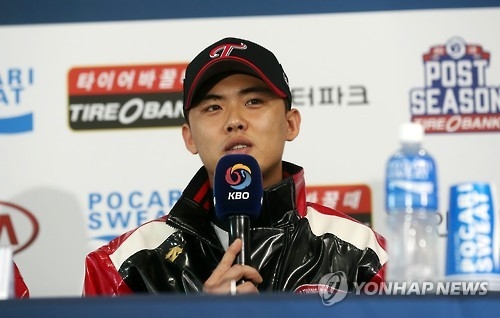 Both managers offered high praise for their closers. Nexen's Yeom Kyung-yup said Kim was a big reason for the club's success and this is all just the beginning.

"He has exceeded my expectations as far as the progress he's made," Yeom said. "He's one of the best relief pitchers in the league today, and if he can stay focused he will continue to dominate."

"He is still evolving as a closer," Yang added. "I think he'll get better and better with each passing day."

During the regular season, Kim had a win and two saves with a 3.38 ERA in six appearances against the Twins this year. He struck out seven in 5 1/3 innings.

Lim recorded six saves against the Heroes in nine appearances, with a 2.79 ERA and nine strikeouts in 9 2/3 innings.