SOKCHO, South Korea, Oct. 12 (Yonhap) -- Leaders of regional governments and businesspeople on Wednesday kicked off an international trade and investment fair of the Greater Tumen Initiative (GTI), an economic cooperation body in the Northeast Asian region, with the expo characterized by the envisioned establishment of an "Olympic road" and utilization of a Seoul-Beijing free trade agreement.

The GTI, which involves South Korea, China, Russia and Mongolia, is aimed at developing areas near the Tumen River between China and North Korea.

Choi Moon-soon, governor of South Korea's northeastern Gangwon Province, said during the opening ceremony at a park in Sokcho, a coastal city in the province, that this year's GTI expo will hopefully help the region embark on a new road towards cooperation and development, declaring the five-day fair open.

Choi said the regional government has made a proposal for the establishment of a traffic network linking the venues of the three consecutive Olympics in Northeast Asia and "the network, if completed, will provide the region with a road of peace and prosperity encompassing its trade, investment, tourism, culture and economy."

The PyeongChang Winter Games, the first of its kind in South Korea, will set off an unprecedented cycle of three consecutive Olympics in Northeast Asia. Tokyo will host the 2020 Summer Olympics and Beijing will stage the 2022 Winter Olympics.

Lee Hee-beom, chief of the PyongChang Olympics' organizing committee, noted that the planned hosting of the three Olympics linking PyongChang in Gangwon, Tokyo and Beijing will expand cooperation in Asia, open a new horizon for exchanges of sports culture among the three countries, and thus contribute to co-prosperity and development in Northeast Asia.

About 2,000 visitors gathered to take part in the opening ceremony. Also attending it were officials from Chinese and Japanese embassies and representatives of the region's local governments. 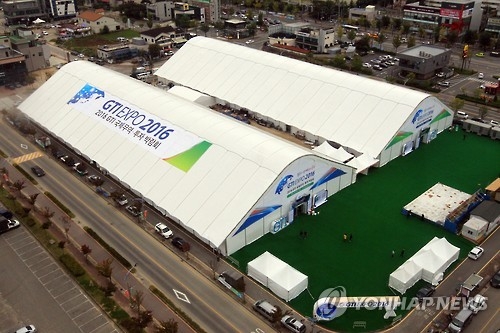 The trade and investment fair is expected to bring together 3,000 businesspeople from about 600 firms of South Korea, China, Russia, Mongolia, Japan and five other Asian countries.

On Thursday, about 500 business leaders from South Korea and China will have a get-together for a forum on a Seoul-Beijing free trade agreement signed last year and other trade negotiations for various projects. It marks the first such meeting to take place since the free trade deal went into force in December last year.

Prior to the opening ceremony, representatives of local governments from five Northeast Asian countries, including Japan, held a meeting that the GTI's Local Cooperation Committee established to strengthen local economic cooperation in the region.

During the meeting, the Gangwon provincial government called for the member countries to actively participate in the Winter Olympics and expand economic cooperation. 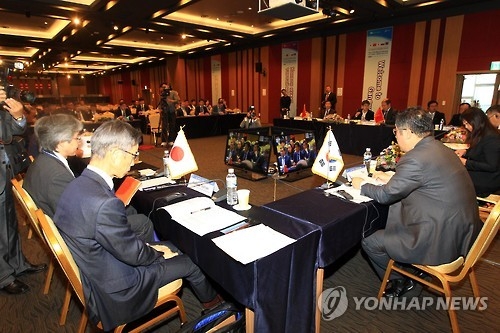