"We have continued our strong condemnation of the North Korean regime because we feel they have become a threat to international peace, and we have continued to foster our belief that nuclear weapons in the Korean Peninsula and also in general should be eliminated completely," the president said in an interview with Yonhap News Agency. "We share this view with the government of South Korea regarding the denuclearization (of North Korea)."

"Regarding Resolution 2270, by executive decree I have ordered all institutions to abide by the terms of the agreement so far as ensuring that the North Korean regime does not get any materials that could be transferred using Costa Rican waters, seas or our airspace," he said, adding that "In a very few days, I will issue this executive decree."

The decree will ensure the resolution is enforced in full in Costa Rica, the president also noted, pledging watertight enforcement of it.

"We are going to be very strict in looking at issues that may look innocent, but may not be innocent," he said, although the central American country is not a major stakeholder in the North Korean issue due to its remoteness from the North, according to President Solis.

The Costa Rican leader is in Seoul as his first visit to the Northeast Asian country which includes a summit meeting with President Park Geun-hye and consultations with local companies aimed at fostering investment.

His visit comes as South Korea is reaching out to the international community for tougher pressure on North Korea over its defiant nuclear weapons program.

After adopting a tough resolution in March, the UNSC is in the process of adopting an even more stringent set of sanctions in response to North Korea's fifth nuclear test carried out on Sept. 9.

During his talks with Park earlier in the day, the two leaders also agreed to speed up negotiations for a free trade agreement between the Asian country and six Central American nations including Costa Rica, Guatemala and Panama. During the summit, the chief executives also agreed to upgrade their countries' 54-year-old diplomatic relationship to a "strategic alliance," according to Solis.

"It was a very productive and friendly exchange ... (the agreed strategic alliance) provides a very important opportunity for us to enhance our trade relations, but also academic, scientific, trade, security, education and culture relations. So I am very pleased in acquiring this new status," he said.

"Korea and Costa Rica moved on to a higher moment in their relations, which is something very few countries enjoy in Latin America and none in Central America," according to him.

If the FTA deal is signed, it will further boost trade between the two countries, which has grown 123 percent in the past 10 years, he also noted.

The president stressed his hopes for more South Korean investment in his country.

"We are interested in more Korean investment in Costa Rica and we want to export more of our products to Korea ... a very wide variety of products, and this entails agricultural, fish, meat, medical devices and tropical fruits," he said. "So it's a very wide offer, and we are certain that the Korean market will be of great importance to us."

Costa Rica will soon establish an office for export promotion in Seoul and set up a task force in order to complete the cooperation agenda discussed during the latest visit, the president said.

"We will continue to develop this diplomatic relationship. I think it's going to intensify as the FTA gets close," he highlighted. 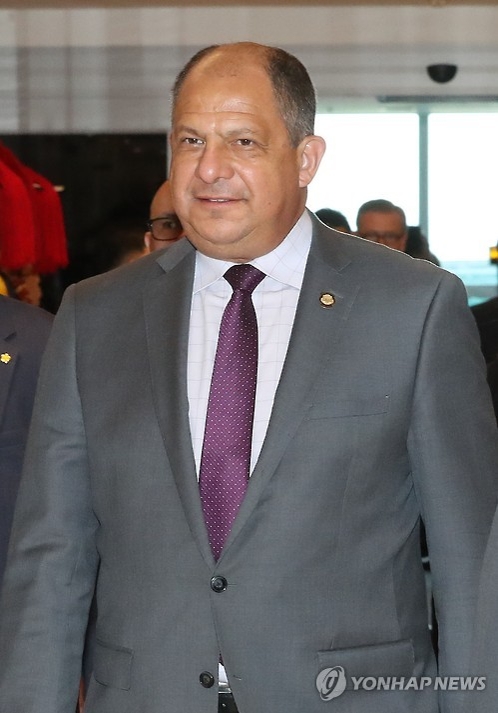