Samsung, the top cap and crown jewel of the South Korean stock market, said Tuesday that the tech giant had decided to suspend production of the Galaxy Note 7 and pull the plug on its flagship smartphone after failing to resolve the battery-fire problem.

The surprise decision sent shock waves through the industry and made Samsung shares free-fall on the Seoul bourse. Samsung nose-dived 10 percent to close at 1,535,000 won (US$1,362) on Wednesday after an 8 percent drop the previous session.

Analysts said institutions will have no choice but to adjust their Samsung holdings should the company's share price continue its downward spiral.

"The episode over the Galaxy Note 7 has become a white elephant to institutional investors," said Kang Hyun-chul, an executive at NH Investment & Securities Co. "Institutions, which have snapped up Samsung, find it difficult to continue to hold its shares or dispose of them."

The recent tumble has put local asset management companies in a quandary as they loaded up on Samsung shares between June and August, when its share price jumped.

Samsung shares traded in the low 1.3 million-won range in early June, but they surpassed the 1.6 million-won mark in August on expectations of improved performance for the third quarter. However, the furor over the Galaxy Note 7 made a big dent after reaching a record high of 1,706,000 won Friday. 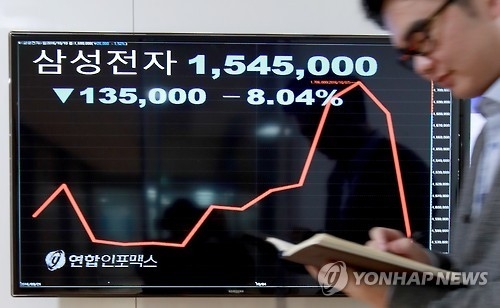 "Institutional investors feel heavy due to a lack of alternatives because Samsung, which accounts for a quarter of the total market capitalization, exerts too much influence on the local bourse," Kang said.

The Galaxy Note 7 incident and Samsung's revision of its third-quarter earnings have forced market watchers to paint a gloomy picture of Samsung's share price down the road.

Shortly after the stock market closed Wednesday, Samsung said in a regulatory filing that it has revised down its operating profit for the July-September period to 5.2 trillion won from an earlier estimate of 7.8 trillion won made Friday, to reflect the cost for the smartphones' recall.

"The Galaxy Note 7 episode represents Samsung's biggest crisis," said Huh Nam-kwon, chief investment officer and vice president of Shinyoung Asset Management Co. "It is unclear how much impact the fiasco will have on customer trust in Samsung."

Song Myung-sup, a researcher at HI Investment & Securities Co., predicted the negative impact of the incident on Samsung's earnings to spill over well into next year.

"The permanent withdrawal of the Galaxy Note 7 is expected to affect Samsung's performances negatively at least till the first half of 2017 by extending its product development period and jacking up related costs," Song said.

A fund manager, who asked not to be named, said he plans to tweak his exposure to Samsung. "We have been thrown into confusion. We will come up with countermeasures after assessing its impact on the company's performances and fundamentals."

Kim Hyo-chan, a fund manager at the Korea Investment Management Co., forecast investors will remain jittery due to high uncertainty until Samsung regains confidence through its next lineup of smartphones.

"Samsung's poor handling of the Galaxy Note 7 has made its negative impact greater."
(END)