According to the sources, state-run utility firms -- Korea Electric Power Corp. and Korea Gas Corp. -- and seven other state-run corporations have already seceded from the FKI.

A total of 19 state-run firms have been members of the FKI, but criticism has grown to force many of them to quit the country's biggest lobby for conglomerates.

The state-run policy lenders such as Export-Import Bank of Korea, the Korea Development Bank and Industrial Bank of Korea are considering withdrawing from the lobby, and more state-run firms are expected to join the move, the sources said.

Established in 1961, the FKI with a base of some 600 companies affiliated with the country's large conglomerates, such as Samsung and Hyundai Motor, has played a key role in helping the country post stellar economic growth in the past decades.

But recently, it has been dogged by a series of scandals in recent years, facing a growing call to disband.

Mir Foundation and K-Sports Foundation, established last year, are suspected of raising a combined 75 billion won (US$67 million) from conglomerates under the help of FKI and key presidential aides. 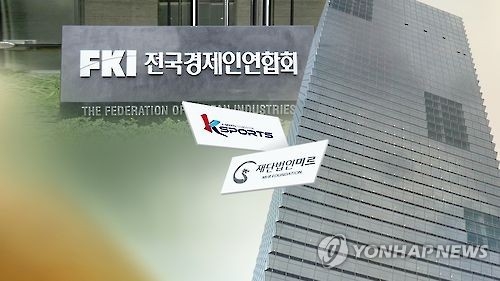