ICT exports reached US$14.53 billion last month, down 8.5 percent from $15.88 billion a year ago, according to the data compiled by the Ministry of Trade, Industry and Energy.

The September figure marked the fastest on-year decline since May this year when it sank 10 percent on-year, with its losing streak extending to 11 straight months starting in October last year.

For the first nine months of the year, ICT exports shrank 8.8 percent on-year to $118.05 billion, showed the data.

Exports of ICT goods accounted for 35.6 percent of the country's $40.86 billion in overall shipments abroad over the one-month period.

Imports of foreign ICT products retreated 5.7 percent on-year to $7.34 billion last month, with the country logging a trade surplus of $7.19 billion in the sector.

Samsung announced a global recall of the Note 7 last month after some of the smartphones caught fire. But the world's largest manufacturer of smartphones finally decided this week to terminate the production of the model, days after resuming the sales of the replaced version, which kept causing similar problems.

By region, shipments to China and the European Union dipped 11.1 percent and 22.9 percent on-year, respectively, while those to Vietnam jumped 25.6 percent and to the United States gained 2.8 percent over the cited period. 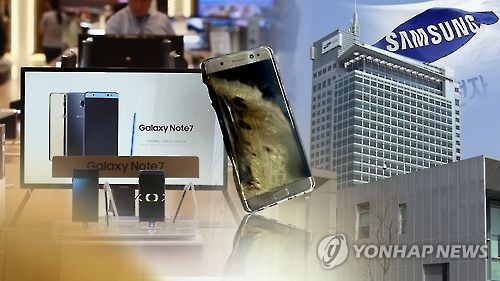