The massive shopping campaign called "Korea Sale Festa," which began Sept. 29 for 11 days, was designed to tie up the retail industry with the tourism and cultural sectors in line with the major Chinese holiday season.

Combined sales of 54 retailers participating in the discount fest between Sept. 29 and Oct. 9 rose 10.1 percent from the same period last year, when the event was first initiated under the name of "Korea Black Friday," according to the data compiled by the Ministry of Trade, Industry and Energy.

The data showed that the top five department store brands, including Lotte Department Store and Shinsegae Department Store, and four discount store chains, such as E-Mart and Homeplus, saw their sales increase 8.7 percent and 1.6 percent on-year, respectively, over the cited period, posting a respective gain of 29.8 percent and 4.2 percent from two years ago.

Over the 11-day period, 580,000 Chinese tourists visited South Korea, up 5.6 percent from the same period last year, contributing to the sharp increase in retail sales, the trade ministry said. 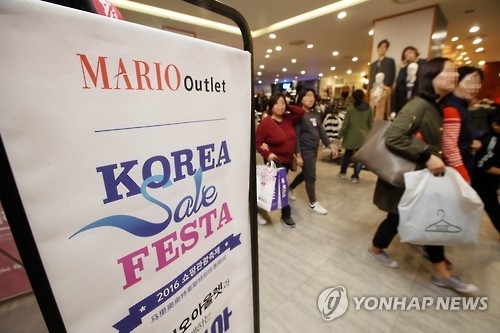