SEOUL, Oct. 13 (Yonhap) -- South Korea's central bank held its policy rate steady for October on Thursday as it revised down its growth outlook for next year.

The monetary policy board of the Bank of Korea (BOK) voted unanimously to keep the key rate unchanged at 1.25 percent, citing concerns about rapidly increasing household debt and a possible rate hike in the United States. 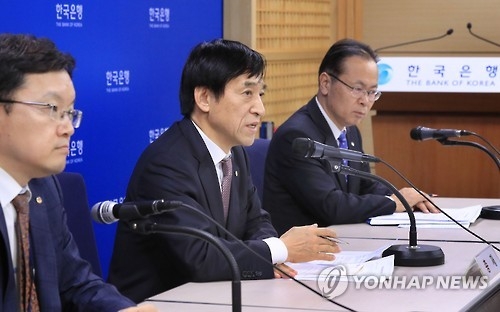 The BOK extended its wait-and-see mode for the fourth straight month after sending the key rate to the record-low level in June to help support Asia's fourth-biggest economy.

"In case the central bank takes an additional monetary easing at a time when there is heightened uncertainty in the international financial markets, it could cumulatively increase household debt and heighten risks in terms of financial stability," Bank of Korea Governor Lee Ju-yeol said in a news conference.

Household debt reached an all-time high of 1,257.3 trillion won (US$1.11 trillion) as of the end of June due to record-low interest rates and strong demand for new apartments. It's one of the highest household debt levels in the world compared with income levels.

The board said it will closely monitor the trend of household debt growth, noting household lending has sustained a trend of substantial increase at a level exceeding that of recent years, led by mortgages.

Exports fell 5.9 percent from a year earlier in September due mainly to sluggish shipments of cars and mobile devices. Outbound shipments came to US$40.9 billion last month, down from $43.4 billion for the same month last year, according to government data.

The board said it forecast that the domestic economy will sustain its trend of modest growth going forward, due to a gradual recovery in global trade and to the effects of expansionary macroeconomic policies. 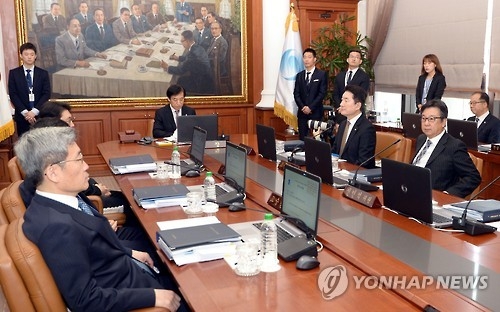 "However, in view of economic conditions domestically and abroad, it judges the uncertainties surrounding the growth path to be high," the board said in a statement.

The decision by the BOK board is in line with an earlier poll conducted by Yonhap Infomax, the financial news arm of Yonhap News Agency, in which all of the 14 economists surveyed forecast the central bank to freeze the key rate in October.

The outlook is lower than the government's estimate that the local economy could reach within a three percent range next year.

Still, Lee said the country will not have difficulties in achieving 2.7 percent economic growth this year.

Samsung announced a global recall of the Note 7 last month after some of the smartphones caught fire. But the world's largest manufacturer of smartphones decided earlier this week to terminate the production of the model, days after resuming the sales of its replacements, which kept causing similar problems.

The country's consumer prices rose 1.2 percent in September from a year earlier, marking the biggest gain since April when the prices increased 1 percent on-year, according to the central bank.

The BOK board said it forecast that consumer prices will gradually rise, due mainly to the disappearance of the effect of the temporary cut in electricity fees and to the rebound in international oil prices.

The BOK said consumer prices could rise 1.0 percent and 1.9 percent this year and next year, respectively.