SEOUL, Oct. 13 (Yonhap) -- Owners of the Galaxy Note 7 in South Korea on Thursday started getting refunds or swapping their phones for another smartphone two days after Samsung Electronics Co. decided to discontinue the device over safety concerns.

Consumers who have a Note 7 in their possession must visit the store where they bought the device to get a refund or exchange.

Buyers of the Note 7 had also received free gifts, including Gear Fit 2s, and they do not need to return them. 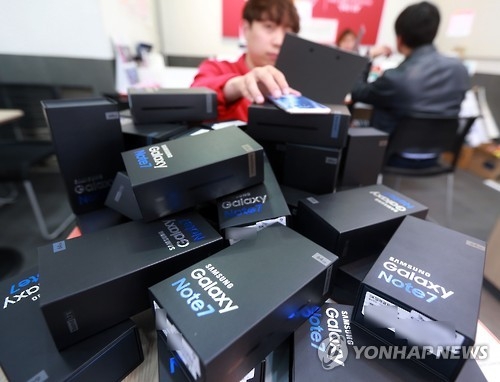 If a customer decides to swap a Note 7 for another Samsung smartphone, he or she will be offered a mobile gift card worth 30,000 won (US$26.60).

For those who swap a Note 7 for the latest Samsung phone, including the Galaxy S7 and the Galaxy S7 Edge, Samsung will also offer 70,000 won toward each owner's cell phone bill, according to mobile carriers.

"The measure is aimed at giving benefits to all owners of the Note 7 to protect its market share," said an official at a mobile carrier.

In a statement, Samsung's U.S. unit also announced the expansion of the Note 7 recall to include all original and replacement Note 7 devices sold or exchanged in the U.S.

"All owners of Galaxy Note 7 devices can exchange their phone for another Samsung smartphone device, or receive a refund, under the terms of the expanded U.S. Note 7 Refund and Exchange Program," the statement said.

"We appreciate the patience of our consumers, carrier and retail partners for carrying the burden during these challenging times," said Tim Baxter, head of Samsung's U.S. affiliate. "We are committed to doing everything we can to make this right."

Samsung will offer up to $100 in total bill credit for a customer in the U.S. who exchanges a Note 7 for any Samsung smartphone, according to the statement.

For a customer in the U.S. who exchanges a Note 7 for a refund or other manufacturers' smartphones, Samsung will offer a $25 total bill credit, it said.

"Samsung's stunning announcement to stop all sales and exchanges of the Galaxy Note 7 is expected to cause noticeable changes in shipments of major smartphone brands," said the market researcher TrendForce.

"In the large-size smartphone market, Samsung's competitors such as Apple, Huawei, Vivo and OPPO are expected to snatch up the demand that was initially going to the Note 7," it said.