SEOUL, Oct. 13 (Yonhap) -- An increasing number of Chinese visitors to South Korea are shopping at downtown and suburban outlets thanks to a rise in visits by young and individual tourists, industry sources said Thursday.

Chinese tourists have recently emerged as big spenders in South Korea, a great boon for South Korea's major retailers, as they are increasingly flexing their financial muscles here.

Lotte Outlets, a subsidiary of the retail and food conglomerate Lotte Group, said sales of its store at Seoul Station spiked 47.4 percent between Oct. 1-9 from a year earlier. China's National Day holiday ran from Oct. 1-7.

Hyundai City Outlet, run by Hyundai Department Store, said the percentage of sales from Chinese tourists to total revenue at its shop in the Dongdaemun shopping district in central Seoul has nearly doubled in seven months after its opening. In March, the share stood at some 8 percent, but it has recently soared to 15 percent.

Hyundai Premium Outlets, also operated by the department store, said the number of foreign visitors to its shop in Gimpo has exceeded the 100,000 mark since its opening in February last year.

The number is forecast to reach 300,000 this year. The store is close to Gimpo International Airport in western Seoul. 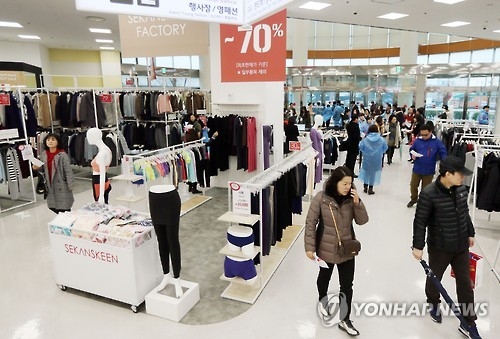 "The number of foreign visitors seems to be rising because the store is more spacious than duty-free shops and carries a wider array of products," a company official said. "In addition, goods are cheaper and foreign visitors can enjoy both shopping and leisure."

Industry watchers said Chinese tourists have started to visit outlets on the outskirts. "Chinese customers still account for less than 5 percent of total sales, but we feel that the number of Chinese visitors is fast rising," said an official of Shinsegae Simon, a premium outlet operator.

To meet growing demand from Chinese tourists, local outlet operators are ramping up efforts to attract more shoppers by offering incentives or having a visit to outlets included on their itinerary.

Lotte Outlets' Seoul Station store has begun a promotional program that gives Chinese shoppers free tickets to theme parks or freebies depending on the amount of their purchases.

"More Chinese are visiting outlets in line with an increase in the number of individual tourists," a company official said. "We plan to conduct a variety of promotional activities to meet the diverse needs of Chinese shoppers."
(END)