Lee met with Adm. Cecil D. Haney, commander of U.S. Strategic Command (USSTRATCOM) on Wednesday (U.S. time), to discuss the allies' joint efforts to counter increasing provocations by the North, the JCS said in a statement. He also inspected U.S. strategic assets such as the B-2 stealth bomber and the B-52 strategic bomber,

"This visit is to reaffirm the U.S.' ironclad commitment to protect South Korea and its own 28,500 troops on the Korean Peninsula as part of its extended deterrence," Lee warned in the statement. "If provoked, the allies will have North Korea pay the price for its actions."

Haney said the U.S. is fully ready to "fight tonight" against any provocative acts by the communist regime for peace and stability on the peninsula and the region. 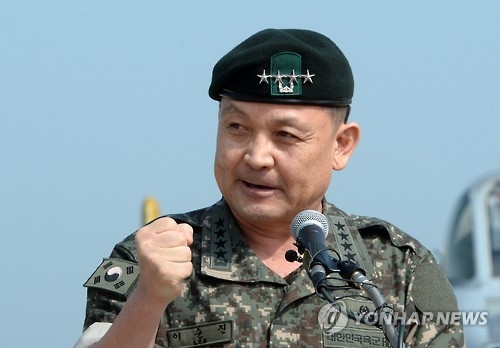 USSTRATCOM, one of nine unified commands of the U.S. Department of Defense, is mainly in charge of missile defense, global strike and strategic deterrence, nuclear weapons operation and combating weapons of mass destruction.

On Thursday, Lee is scheduled to meet his counterpart U.S. Joint Chiefs of Staff Chairman Gen. Joseph F. Dunford to analyze the current security status quo on the Korean Peninsula during the 41st military committee meeting (MCM) in Washington D.C., the statement said.

On the sidelines of the MCM meeting, joint chiefs of staff from Seoul, Washington and Tokyo are expected to deliberate on ways to beef up their combined military partnership against growing North Korean nuclear and missile threats, it said.