SEOUL, Oct. 13 (Yonhap) -- A former chief of Seoul's police agency has been summoned by state prosecutors earlier this week over the death of a farmer who was knocked down by a water cannon during a protest last year, official sources said Thursday.

The Seoul Central District Prosecutors' Office called in Goo Eun-soo, former chief of the Seoul Metropolitan Police Agency (SMPA), Wednesday and questioned him over the death of Baek Nam-gi.

The farmer, 69, died of acute renal failure on Sept. 25, after months of hospitalization in a state of comatose since he was hit by the water cannon during the demonstration in November. Baek is said to have taken part in the protest to call on the government to carry out its pledge to increase the price of rice.

Critics have argued that Baek died because of the police's excessive crackdown on the protest.

Police, however, have been claiming that there is no clear link between the water cannon and Baek's death, and have sought to carry out an autopsy to clarify the cause of death.

Late last month, a local court issued a warrant to conduct an autopsy on Baek, while attaching conditions to discuss with the bereaved families regarding necessary procedures.

Baek's family has been declining to go through a consultation with the police, claiming that the cause of death is clear.

The execution of the warrant must be commenced by Oct. 25.

Prosecutors said they questioned Goo, who was the chief of the SMPA when the incident took place, over how the decision to mobilize the water cannons was made and if such a decision was appropriate.

Meanwhile, controversy has been escalating over the death certificate issued by Seoul National University Hospital (SNUH), which categorized Baek's death as that caused by a medical condition, and not external trauma.

Even medical experts at SNUH have been divided over how to attribute the death.

Doctor Paek Sun-ha, who was in charge of Baek, however, claimed the patient died because his family declined to provide approval to carry out necessary treatment. He has declined to revise the death certificate. 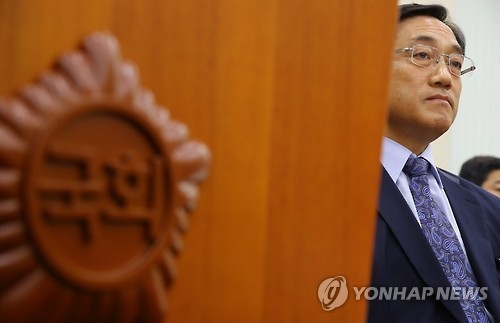