"The Rain" is the lead single of the group's new EP "STRANG3R," the second part of a trilogy series that began with their previous album "MYST3RY" released in February.

Despite the catchy tune of the song, the lyrics are anything but light and cheerful. The downbeat, emotional dance song compares rain to their sadness and tears after a breakup.

The music video portrays the group's trademark "aesthetic" as the ladies cover themselves from raindrops with colorful umbrellas.

The album, featuring six songs, shows off the singers' new transformations as well as musical development.

Ladies' Code debuted in 2013 with the EP "Code#01." The group's original lineup consisted of leader Ashley and members RiSe, EunB, Sojung and Zuny. However, on Sept. 3, 2014, the group was involved in a car accident that resulted in the deaths of EunB and RiSe. The act returned as a trio in February of this year with its album "Myst3ry." 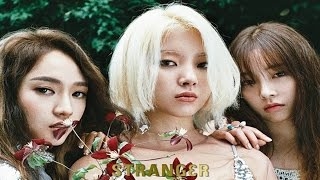 Ladies' Code unveils the music video for 'The Rain'

Ladies' Code unveils the music video for 'The Rain'