SEOUL, Oct. 13 (Yonhap) -- Rep. Choo Mi-ae, the leader of the main opposition Minjoo Party of Korea (MPK), lashed out at the prosecution Thursday, calling it "politically minded" and accusing it of "trumping up" criminal charges against her and other lawmakers.

Her accusations came a day after state prosecutors indicted her and 13 other party lawmakers on charges of violating the Public Official Election Law.

"It is a false, concocted indictment," the MPK chief said during an emergency session of her party's decision-making Supreme Council. 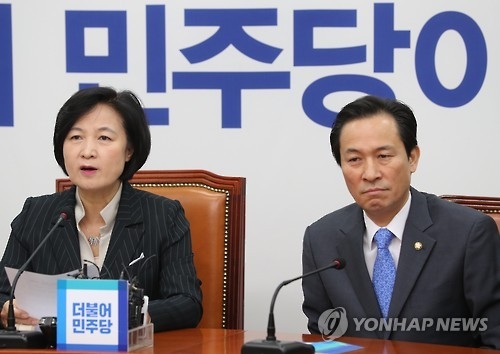 Choo, then, claimed that prosecutors leveled charges against her and her colleagues in a "retaliatory" step against the opposition party that has recently made a series of corruption allegations involving some of President Park Geun-hye's close aides.

"I will never let it slip by should (the government) capitalize on the law to conceal any corruption (committed by top government officials)," she said. "We will definitely win in the presidential election (next year), shore up justice and return the prosecution to the people."

The ruling Saenuri Party, meanwhile, said, "Everybody is equal before the law.

"The opposition party says the prosecution's measure was intended to repress it or retaliate against it," Saenuri spokesman Kim Sung-won told reporters. "But this reaction shows its overbearing attitude to reign over the law."

Choo bashes prosecution over her indictment

Choo bashes prosecution over her indictment