SEOUL, Oct. 13 (Yonhap) -- Leaders from Buddhist bodies in South Korea, China and Japan have expressed hope for peace and exchanges among the three Northeast Asian countries at an annual gathering in the eastern China city of Ningbo, a South Korean Buddhist organization said Thursday.

According to the Association of Korean Buddhist Orders, the 19th South Korea-China-Japan Buddhist Friendly Exchange Conference, held at Xuedou Temple in the city on Wednesday, brought together 400 monks from the three nations under the theme of inheriting a thousand years of Buddhist traditional spirit.

During the meeting, the Buddhist leaders issued a joint declaration calling for world peace and agreed to hold a preparatory meeting on March 22-23 on South Korea's largest island of Jeju to lay the groundwork for next year's conference.

In 1995, the Chinese Buddhist circles held the first trilateral conference in Beijing to enhance understanding and cultural exchanges with their South Korean and Japanese counterparts. Two years earlier, Chinese Buddhist leader Zhao Puchu, put forward the idea of a "golden bond" of Buddhism among the three nations, a concept that captures the three nations' past and future Buddhist relations, which led to the conference's inauguration. 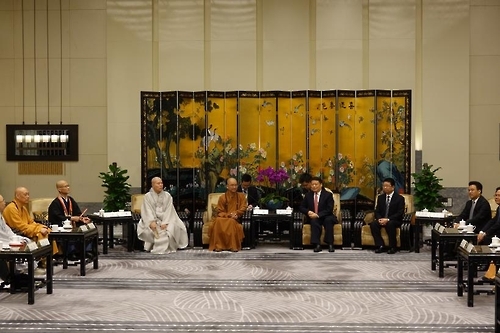