SEOUL, Oct. 13 (Yonhap) -- A top U.S. official on the North's human rights Thursday stressed the need to get North Koreans to gain greater access to outside information as the move will help them recognize the reality of their regime.

"The success of the (North Korean) regime in maintaining controls and suppressing its population is very much related to its ability to control media and access to information," Robert King, Washington's special envoy for North Korean human rights issues, told a forum.

"There is hunger for information. We need to continue to provide information to North Korean people so that they will know what's happening in the world," he said. 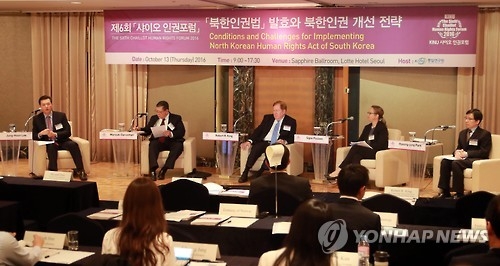 King arrived in Seoul for a four-day visit whose itinerary included attending the 6th Chaillot Forum on North Korea human rights to be hosted by the Korea Institute for National Unification (KINU).

His remarks came as the U.S. government is known to have submitted a report to Congress that lays out a strategy to make more information available to North Koreans.

It set forth "a detailed plan for making unrestricted, unmonitored and inexpensive electronic mass communications available" to North Koreans, which is believed to refer to such small devices as radios, USB drives and DVDs.

The report is the latest in a series of measures by Washington to increase pressure on Pyongyang over its human rights abuses.

North Korea is cracking down on smuggled DVDs containing South Korean movies and dramas as more North Koreans are surreptitiously getting outside information through these means.

The communist country has long been labeled as one of the worst human rights violators in the world. Pyongyang has bristled at such criticism, calling it a U.S.-led attempt to topple its regime.

Park Hyeong-jung, director of the KINU's Center for North Korean Human Rights Studies, said that the extent to which North Korea carries out public executions would be a yardstick in gauging the level of discord between the regime and its people.

He said in a report that North Korea is presumed to have publicly executed about 300 North Korean officials and ordinary citizens since 2012 under the Kim Jong-un regime.

"An increase in North Koreans' defection and public execution will serve as 'very dangerous' signs of (instability) in the North's regime," Park said.