In July, the U.S. slapped sanctions on North Korean leader Kim Jong-un over human rights violations for the first time, a move that highlights Washington's determination to put pressure on the North.

Ambassador Robert King said that the U.S. is periodically tracking information to review whether it could further impose sanctions on other North Korean officials, including Kim Yo-jong, the younger sister of the North's leader. 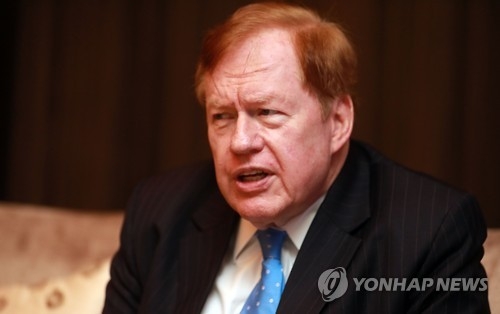 Kim Yo-jong is known to serve as a vice director of the ruling Workers' Party of Korea's propaganda and agitation department, whose works, analysts say, undermine North Koreans' rights to know.

"We will continue to follow what she is doing and what's going on," he added.

The envoy said that Washington's sanctions on the North Korean leader will help North Koreans raise questions about the dignity of the regime and leadership.

North Korea's serious human rights violations gained the international limelight on the back of a landmark report by the U.N. Commission of Inquiry (COI) released in early 2014.

The report calls for the U.N. Security Council to refer Pyongyang's "crimes against humanity" to the International Criminal Court (ICC). The U.N. General Assembly adopted relevant resolutions for the second consecutive year in 2015.

King said that it is too early to say what the upcoming resolution would look like, but he believes that it would be an "updated" resolution that reflects the latest development over Pyongyang's rights records.

"In a few weeks, we will probably have a draft resolution. ... It will certainly be an updated resolution," the U.S. envoy said without elaborating.

She said that the international community will seek to "shine the world spotlight on the worst crimes" with no parallel in the world.

King said that the U.S. is not raising North Korea's human rights issue to put pressure on Pyongyang to give up its nuclear weapons, but it is doing so because of Pyongyang's "horrible" rights situation.

King said that the U.S. and South Korea are closely cooperating on ways to get North Korean people greater access to outside information.

The U.S. government has submitted a report to Congress that lays out a strategy to make more information available to North Koreans, a move that experts say would be an effective way to bring about changes in the repressive regime.

A U.S. sanctions law calls for the report to set forth "a detailed plan for making unrestricted, unmonitored and inexpensive electronic mass communications available to the people of North Korea."

"We are looking at all kinds of ways of getting information into North Korea," King said, adding that measures would include uses of USB drives and information broadcast by radio.

"(The U.S. and South Korea) share common concerns that people who don't have access to information and don't know what's going on are less likely to be able to influence their government to take positive actions and respond to what's really happening in the world," he added.