INCHEON, Oct. 13 (Yonhap) -- South Korean LPGA golfer Kim In-kyung is the star-crossed athlete who will always be defined by her failure, rather than by her success.

Though she admits she's still haunted by past demons, the 28-year-old has managed to fend them off to earn her first LPGA win in six years earlier this month. She also won a Ladies European Tour event in Germany last month.

Kim maintained her strong form of late at the LPGA KEB Hana Bank Championship on Thursday, and took an early club house lead at four-under 68 at Sky 72 Golf & Resort's Ocean Course. It's the only LPGA tournament held in South Korea each fall.

"I wanted to make sure I'd be ready for this week," Kim told Yonhap News Agency, after picking up four birdies against no bogey. This is her sixth tournament in seven weeks.

"I was a bit worried whether I could play well this week, but my ball-striking was pretty solid," she added.

Kim's victory at Reignwood LPGA Classic in Beijing on Oct. 2 ended a six-year victory drought. More importantly, it helped ease the pain of a heartbreaking moment four years ago. 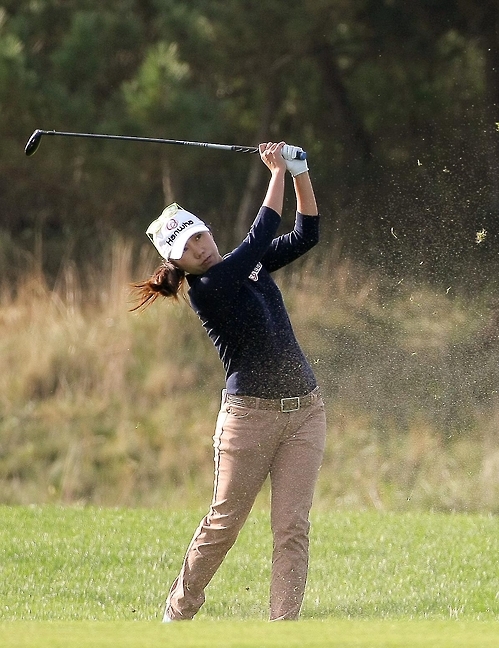 Kim left herself a one-foot putt at the 72nd green to seal her first major title at the 2012 Kraft Nabisco Championship. Kim's putt lipped out, much to the shock of everyone watching, and the stunned golfer just stood there, her mouth agape in disbelief.

Kim dropped into a playoff with fellow Korean Yoo Sun-young and lost on the first extra hole.

Asked how she's dealt with the miss, Kim said she's simply learned to live with it.

"I don't know if I've necessarily overcome that," she said. "To be honest, it still bothers me when people ask me about the past. I think it's just part of being an athlete. Something like that could happen to anyone. And I think I came out more mature because of that experience."

Kim, who had picked up an LPGA win in each of 2008, 2009 and 2010, gradually faded away. She was once considered among the Korean golfers born in the year 1988, the generation inspired by the retiring legend, Pak Se-ri. They're collectively called "Se-ri's Kids."

Her contemporaries like Park In-bee and Shin Ji-yai were winning multiple majors and reaching the very top of the world rankings. But Kim said she never once felt she was falling behind.

"Everyone is different," she said. "All we can do is to keep doing the best we can from our respective position."

Before winning in China, Kim picked up a win in Germany. Another win in her home country would complete a neat trifecta, but Kim insisted she isn't looking that far down the road.

"This is not the type of course where you can get greedy and keep attacking pins," she said. "I just have to do my best one hole at a time."

(Yonhap Interview) LPGA golfer learns to live with past demons

(Yonhap Interview) LPGA golfer learns to live with past demons