The drill was held in the Yellow Sea with six vessels taking part, the Coast Guard said. The vessels fired crew-served weapons to examine their ability to counter possible attacks by law breakers, it said.

As part of the exercise, the vessels engaged in a mock situation where Coast Guard officers cracked down on Chinese boats poaching in South Korean waters.

The latest drill was part of the Coast Guard's maritime exercise carried out twice every year, in the first and latter half.

On the same day, the Coast Guard also held a video conference among its senior officials to specify guidelines on using cannons and other firearms during crackdown operations.

The meeting came a few days after the government said it will actively use force, against boats and sailors that violently interfere with the execution of law enforcement authorities' duties.

Hong Ik-tae, chief of the Coast Guard, said he will gather opinions from front-line officers to effectively push forward with plans that can better tackle illegal fishing. He asked all officers to carry out their duties with confidence.

The Coast Guard said its 4.5-ton speedboat sank Friday during an operation against illegal fishing in the Yellow Sea as a 100-ton Chinese boat intentionally rear-ended it. 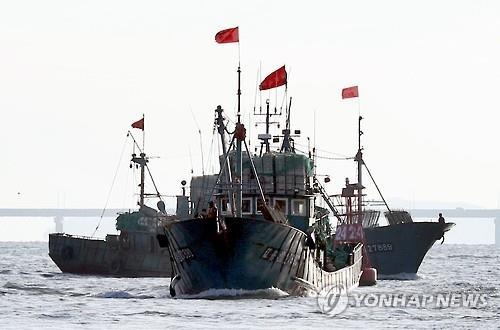