Stielike and eight players from the 23-man squad based in the domestic K League Classic returned home Thursday from Tehran after taking their first defeat in the final Asian qualifying round for the 2018 FIFA World Cup. South Korea fell 1-0 to Iran at Azadi Stadium in Tehran on Tuesday.

"My heart feels heavy because we returned home without a good result," Stielike said at Incheon International Airport. "We failed to show what we had prepared."

Against Iran, South Korea failed to register a shot on target. Now, with two wins, a loss and a draw, South Korea are in third place in Group A, where they are competing against Iran, Uzbekistan, Syria, Qatar and China.

In the final regional qualification there are 12 teams divided into two groups of six. The top two teams from each group will earn automatic berths to the World Cup, while the two third-place nations will have to go through playoff rounds to qualify for the next World Cup in Russia.

"We made some mistakes early on," he said. "We tried to move the ball and switch our attacking directions quickly, but we failed to do that."

At the jam-packed Azadi Stadium, home supporters wore black-colored clothes to show their respect for the first of two mourning days -- Tasua and Ashura -- in the Shia Islam calendar. Stielike said the fan atmosphere at the stadium also intimidated his team.

During the post-match interview, Stielike drew criticism from South Korean fans by saying that they lost because the team didn't have a striker like Qatari forward Sebastian Soria. The Uruguay-born striker scored a goal and drew a penalty in Qatar's 3-2 loss to South Korea last week.

Stielike explained on Wednesday that his comments during the interview were "misinterpreted." The German coach emphasized again Thursday that there was a misunderstanding of his remarks.

"In the morning of the match day, I talked with Ji Dong-won and actually told him that he has better dribble and passing skills than Soria," he said. "In the press conference, I was talking about our aggressiveness when we had a come-from-behind win against Qatar, and I mentioned Soria in that situation."

Stielike said there's no friction between him and the players after his controversial remarks. The coach said he already explained his intention of the comment to his players.

"I had a separate talk with the players about this issue," he said. "What's certain is that there's no misunderstanding between me and the players."

South Korea, seeking their ninth consecutive World Cup appearance, will next face Uzbekistan at Seoul World Cup Stadium in Seoul on Nov. 15. Uzbekistan are second in the group behind Iran after collecting nine points from three wins and one loss.

Stielike said he is not going to make a big change to the squad, although he will test some players in a friendly match against Canada at home, which will be held four days before the Uzbekistan match.

"We need to improve our mentality first," he said. "About seven or eight months ago, we were able to display our plays on the pitch. We were active when we had the ball."

Following the disappointing performance against Iran, some local fans here urged Stielike to resign. The coach, however, said the players should not be distracted by media reports on his future and just focus on their next match.

"People should think about what they can earn from a coaching change at this moment," he said. "Will it (appointment of new coach) lead directly to improvement of the players' performance?" 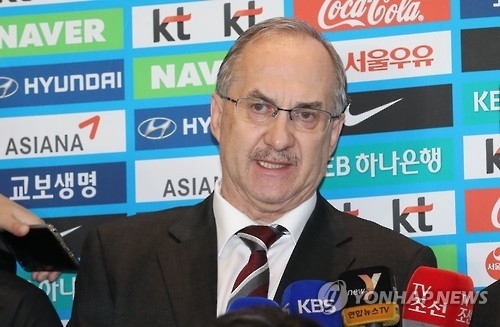