The ships are expected to reach Busan on Sunday after the six-day "Invincible Spirit" maritime maneuvers ends the day before, it said.

The latest drill is noteworthy because the allies have applied the concept of "Korea Massive Punishment & Retaliation" (KMPR) to improve striking capabilities of ship-to-ground missiles on top of the usual anti-ship and anti-air exercises, Seoul's defense ministry said.

The KMPR operational concept is aimed at decimating parts of Pyongyang, and envisions launching pre-emptive attacks on North Korean leader Kim Jong-un and the communist regime's military leadership if signs of imminent use of nuclear weapons are detected.

"While in port, Ronald Reagan CSG personnel will have the opportunity to visit and engage with their South Korean Navy partners and conduct a cultural exchange with local people," the U.S. naval command said in a statement.

A military spokesman then said the commanding admiral of the USS Ronald Reagan group and the captain of the aircraft carrier are expected to deliver messages to members of the South Korean media who have been invited to the ship to see for themselves air flight operations. The journalists will tour the ship later on Friday. 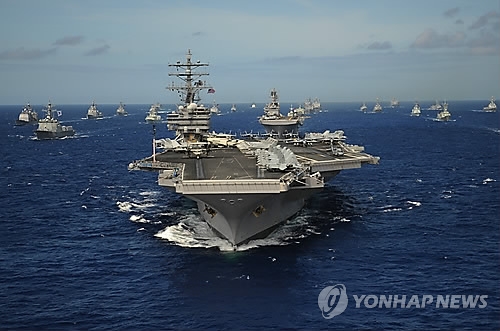 The 333-meter long USS Ronald Reagan is the flagship of CSG 5 home-ported at Yokosuka, Japan, as part of the U.S. Seventh Fleet. It has on board about 80 aircraft ranging from fighter jets to helicopters and has a crew of 5,000 personnel.

The Ronald Reagan is the U.S. Navy's only forward-deployed aircraft carrier and strike group at the same time. It is permanently deployed to the Seventh Fleet and can be used to counter threats posed by countries like North Korea.

This year alone, North Korea conducted two nuclear tests and test-launched multiple ballistic missiles, including a submarine-launched ballistic missile, escalating tensions on the Korean peninsula and in the region.