SEOUL, Oct. 13 (Yonhap) -- Doosan Bobcat Inc., a unit of power and construction equipment conglomerate Doosan, said Thursday it has decided to cut its initial public offering price and the number of stocks to be sold amid lukewarm market response.

Last week, the company said it would push back its planned IPO on the local stock market, as investors wanted it to lower the IPO price. In August, the company received preliminary approval for its IPO.

Doosan Bobcat also said it plans to sell some 30 million stocks held by its affiliates such as Doosan Infracore Co., smaller than the previously-hoped-for 49 million shares. If the company sought to proceed with its original IPO plan, Doosan Bobcat's IPO could reach some 2.45 trillion won, becoming the country's second-biggest market debut since Samsung Life Insurance Co.'s 4.89 trillion won in 2010.

The IPO plan is part of the Doosan Group's efforts to improve its financial status. The power-to-construction equipment conglomerate has raised trillions of won by selling assets in recent years to survive a prolonged slump in the construction industry.

The Doosan Group hopes its debt will be reduced to 8 trillion won from the 11 trillion won recorded at the end of last year with the proceeds from the IPO. 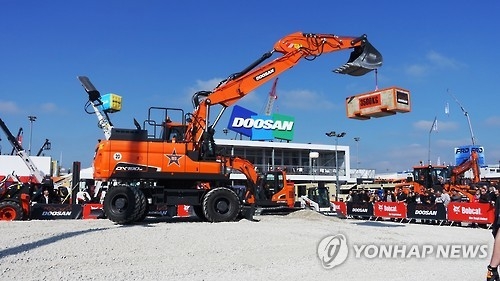