Lee shot a seven-under 65 at the par-72 Ocean Course at Sky 72 Golf & Resort, adjacent to Incheon International Airport. She has opened a three-stroke lead over five golfers, thanks to eight birdies and a bogey.

This is the only LPGA tournament in South Korea each year. It's the third stop of the tour's Asian swing, and boasts the strongest field so far, with 17 of the world's top 20 in action.

Lee, born in Los Angeles to Korean parents, is looking for her first LPGA victory. 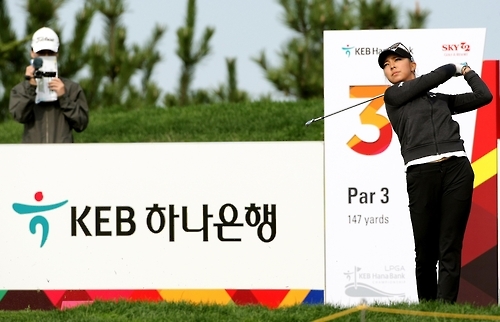 Among those tied for second place at four-under is Kim In-kyung of South Korea. On Oct. 2, Kim ended her six-year LPGA winless drought by taking the Reignwood LPGA Classic in Beijing. A month before that, Kim won a Ladies European Tour event in Germany.

Cho Jeong-min, one of 14 Korea LPGA (KLPGA) players in the field, also shot a 68 in the final round. Cho has won twice on the KLPGA Tour this year.

A South Korean has won the past three LPGA events.

Defending champion Lexi Thompson shot a 70 to get into a five-way tie for 12th.

Among other notables, world No. 1 Lydia Ko struggled to a 75 with three birdies, four bogeys and a double bogey. Chun In-gee, the highest-ranked Korean at No. 3, shot an even 72 with four birdies and four bogeys.

Pak Se-ri, a World Golf Hall of Famer playing in her final tournament here, shot an eight-over 80, tied with two others for the day's worst score. She promptly withdrew from the event, completing her trailblazing LPGA career that began in 1998.