DAEGU, Oct. 13 (Yonhap) -- An economic delegation from the city of Daegu in South Korea's southeast region has won a pledge from Vietnam to support the launch of a branch of Daegu Bank in Ho Chi Minh City, as it is widening economic and tourism exchanges with the Southeast Asian country, South Korean city officials said Thursday.

The pledge was given as the delegation, led by Daegu Mayor Kwon Young-jin, held talks with Vietnamese Prime Minister Nguyen Xuan Phuc in Hanoi the previous day.

During the talks, Kwon also sought Vietnam's cooperation with the entry of South Korean firms in Daegu and its nearby locations into the country. 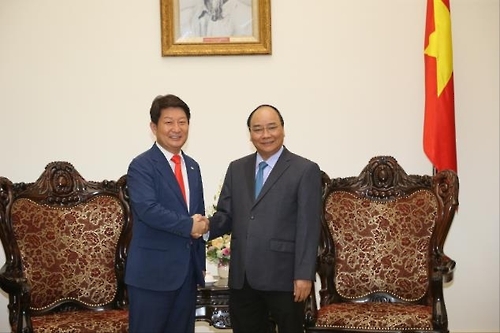 The delegation met separately with Nguyen Thanh Phong, mayor of Ho Chi Minh City, Vietnam's largest economic center, and Dinh La Thang, the Vietnamese city's secretary of the Party Committee, both pledging to cooperate in their efforts to open a direct flight route linking Daegu with Ho Chi Minh City in anticipation of increased business exchanges and tourism needs between the two regions.

On Tuesday, 100 business leaders from Daegu and Ho Chi Minh City discussed ways to accelerate industrial cooperation and investments during a business forum at a hotel in Ho Chi Minh City. Representatives of four companies from Daegu signed six business deals with their Vietnamese counterparts.

The delegation will travel to the central Vietnam city of Da Nang, with which Daegu has formed a friendly and cooperative relationship, for talks with the Vietnamese city's officials to discuss its possible foray into the water and monorail service industries there, before returning home on Sunday.