INCHEON, Oct. 13 (Yonhap) -- Retiring South Korean golf legend Pak Se-ri was feted in a ceremony held at her final tournament here on Thursday, with her fellow players bidding her a teary farewell.

Pak, 39, has already played her final U.S. event at the U.S. Women's Open in California in July, but decided to make one last appearance at the LPGA KEB Hana Bank Championship, the only LPGA event held in her native country each year.

She played the first round in the final pairing with defending champion Lexi Thompson and Feng Shanshan of China. Pak wiped away tears as she finished a round at eight-over 80, the worst score in the field with a birdie and nine bogeys, and she promptly withdrew from the event.

Despite Pak's adventurous round, her pairing enjoyed a sizable following. At the start of the day, fans were given pink commemorative towels with the inscription, "Thank You Seri. We Love You." 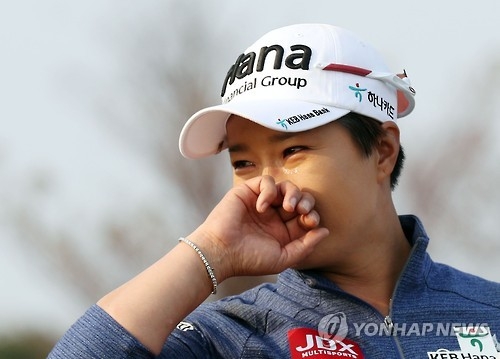 And during the ceremony held after Pak's round on the 18th hole, the golfer was joined by Park In-bee, whom Pak coached to the Olympic gold medal in Rio de Janeiro in August, and Choi Na-yeon, a nine-time LPGA winner, among others.

Park and Choi are part of the generation of golfers -- collectively called "Se-ri's Kids" -- inspired by Pak to pick up golf.

The giant screen set up next to the 18th green played a video clip in tribute to Pak. Choi Kyoung-ju, an eight-time PGA Tour winner, and others tipped their caps to pay their respects.

Pak made a sensational LPGA debut in 1998, putting together one of the most remarkable rookie years in history. She grabbed two majors among her four victories en route to winning the Rookie of the Year. She was also named the Associated Press Female Athlete of the Year for 1998.

With 25 tour wins and five majors, Pak joined the World Golf Hall of Fame in 2007. She remains the only Korean member there.

She is also remembered as one of golf's most important pioneers, having inspired the likes of Park, Choi and also Shin Ji-yai, a former world No. 1 with two major titles.

Pak was also a beacon of hope for South Koreans. Her meteoric rise in women's golf coincided with the financial crisis in her native land in the late 90s, and her heroics on the links were regarded as a source of courage for the struggling people.