SEOUL, Oct. 13 (Yonhap) -- A total of 33 incumbent lawmakers have been indicted on charges of illegal electioneering, South Korea's top prosecutor said, as the statute of limitations for crimes committed during April's general elections is slated to expire Thursday.

Eleven lawmakers from the ruling Saenuri Party, 16 from the main opposition Minjoo Party of Korea, four from the minor opposition People's Party and two independent lawmakers have been charged as of Thursday afternoon over alleged irregularities in the runup to the polls for the 20th National Assembly, Prosecutor-General Kim Soo-nam said during a parliamentary audit.

The defendants include Rep. Choo Mi-ae, the chief of the main opposition party, who is suspected of spreading false information to get elected, according to prosecutors. She has been flatly denying the allegations raised against her.

Earlier on Thursday, Choo lashed out at the prosecution, saying it had political motivations to level charges against her and other lawmakers.

The country's top prosecutor, however, said it did not consider political factors when dealing with election law offenders.

The number of lawmakers to stand trial might increase as prosecutors can still file charges until midnight. 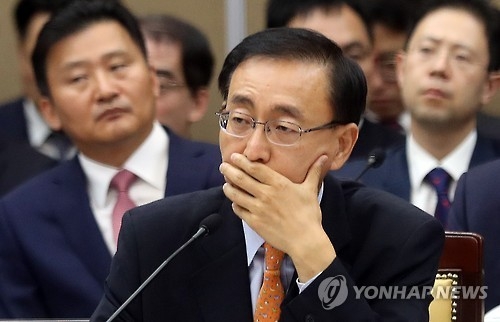