Over the course of the season, Kim turned boo birds into his supporters, batting .302 with six home runs and 22 RBIs in 95 games. He was limited to 305 at-bats, but posted a robust .382 on-base percentage on a team full of free swingers.

After Kim's dismal spring training, the Orioles' front office pressured him into spending some time in the minors to begin the season. Kim exercised his contractual rights and refused the demotion, leading home fans to jeer him during the player introduction before the season opener.

As he gradually received more playing time, Kim demonstrated the kind of contact ability that made him a perennial All-Star in the Korea Baseball Organization (KBO). He also hit a key ninth-inning home run against the Toronto Blue Jays to save the Orioles' season in September.

Kim said he wasn't angry at the fans who booed him because he felt he deserved it. 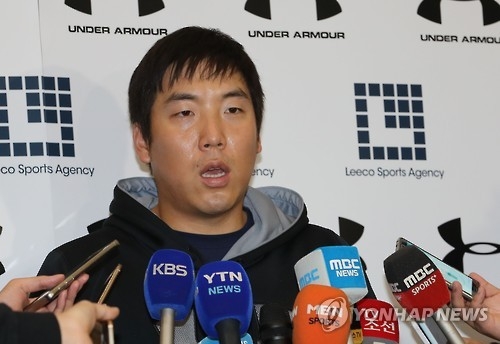 "I was only determined to change the boos into cheers," Kim told reporters at Incheon International Airport. "It took me some time to adjust to the new league. I was facing pitchers for the first time, and I experienced difficulties."
Kim said he relied on fellow Korean players in the majors to get through his up-and-down first season, particularly Choo Shin-soo of the Texas Rangers and Lee Dae-ho of the Seattle Mariners.

"We talked on the phone quite often, and they encouraged me a lot," Kim said. "I'd like to thank them once again for helping me this year."

"In terms of velocity, the fastballs in the majors weren't that much different from what I faced from (KBO hard throwers) Radhames Liz and Henry Sosa," Kim said. "But the major league pitchers don't throw anything straight. Their fastballs have great movements."

The Orioles lost to the Blue Jays in the American League wild card game, and Kim said not winning the last game of the season hurt him.

"I'd give myself 5 out of 10 for the season," Kim added. "Those five points are on perseverance alone."

He said he hasn't set any statistical goal for next year, adding he's preparing to make some mechanical changes.

"I have to keep improving," he said. "I don't want to set any limits next year."