BUSAN, Oct. 13 (Yonhap) -- Kang Soo-youn, executive director of the Busan International Film Festival (BIFF), has credited the hosting of this year's edition, despite all the trouble, to support from the people in the local film industry.

"At the start of this year, even I wasn't sure whether this year's festival would be held or not," said the iconic actress of the Korean film industry during an interview with Yonhap News Agency on Wednesday. She added, "It was close to a miracle" that BIFF put together a lineup that largely holds up against previous editions.

The Busan festival kicked off last Thursday for a 10-day run, featuring 299 films from 69 countries from around the world. It came after two years of political infighting between festival organizers and the Busan city government over the festival's artistic freedom. But until the first half of the year, it was uncertain whether the 21st edition of the festival would be able to be held as usual. 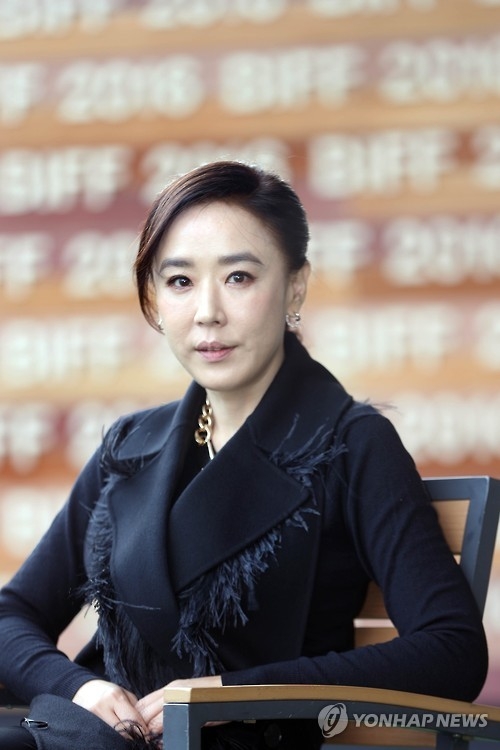 The dispute began in 2014 when then-festival director Lee Yong-kwan pushed for the screening of a controversial documentary in spite of opposition from Busan mayor and then-BIFF organizing committee chairman Suh Byung-soo. The city of Busan funds around half of the festival's annual budget.

The film "The Truth Shall Not Sink with Sewol," also known as "Diving Bell," criticized the central government's botched attempt to rescue the passengers of the Sewol ferry that sank in April, claiming more than 300 lives, mostly teenage students.

The Busan metropolitan government conducted an unprecedented audit into the executive committee members and cut about half of the festival's annual budget. Claiming the action as a "political retaliation," local film groups declared a boycott of this year's event.

The crisis appeared to die down when both sides amended the Busan festival's bylaws to include a clause that guarantees its artistic freedom and Kim Dong-ho, the festival's founding director, took over the chairmanship from the Busan mayor.

But there came an unexpected disruption on the eve of the festival's opening: Typhoon Chaba. Some Busan-bound trains and flights were canceled that day as the typhoon brought strong winds and heavy rainfall to South Korea's southern coastal areas.

The festival had to move all open-air events scheduled on Haeundae beach to the Busan Cinema Center, the main festival venue, because the typhoon tore down all of the makeshift facilities set up on the beach.

"I worried till the morning of the opening day what would happen if we cannot open the festival," Kang said.

So, she nodded when questioned about the mounting criticism that this year's edition lacked the festivity of previous editions.

"We expected this would happen and had no other choice," she answered, adding that organizers had to scale down the size of the festival due to a 30-percent cut in the budget. This resulted in less screening times and subsequently less viewers, she explained. "But we avoided the worst-case scenario, despite all the trouble, thanks to local film industry people."

Focusing on the essentials of the Busan festival was what the organizers could choose amid the festival's uncertain future, she said. They were discovering, supporting and educating young up-and-coming Asian directors and promoting solidarity for, and presenting a vision of, Asian film.

"I and other BIFF organizers shared the thought that we should scale down not a single program dedicated to the roles. Fortunately, many people said that we did well in this regard."

The Busan festival has been going smoothly with only two days left, but not a small number of industry figures maintain the view that the political infighting between festival organizers and city officials has yet to reach a complete end.

Of the nine film groups that initially declared a boycott of this year's festival, four, including the Directors' Guild of Korea, chose not to attend, demanding a stronger measure to ensure the festival's freedom from any political influence.

Making it a festival for all film figures, including those who are currently staying away, is the task that Kang now has to embark upon.

"Everyone has his or her own thoughts on this issue but has the same view that the festival must go on," she said. "I think we all should make efforts to get a good result."

BIFF director Kang Soo-youn: This year's festival was a miracle

BIFF director Kang Soo-youn: This year's festival was a miracle