Though winning the first game in any series is considered crucial, recent history indicates the Heroes may still have hopes. The team that lost the first game still went on to win the first-round series in four of the past seven years.

The Twins drew first blood in the top of the first. Kim Yong-eui, the team's offensive catalyst all night, opened the game with a single off Scott McGregor, and reached third after a groundout and a single. 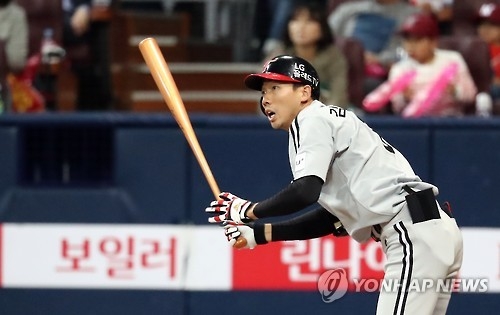 Cleanup Luis Jimenz hit a dribbler down the first base line. The ball appeared to be going foul, but first baseman Yoon Suk-min grabbed it right over the line. Jimenez was out at first but Kim trotted home to make it 1-0.

The Heroes wasted a pair of bases-loaded opportunities. In the bottom first, a walk followed by a pair of singles packed the bases, but Kim Min-sung grounded into a rally-killing 5-4-3 double play.

Three singles loaded the bags again for the Heroes in the fourth, and they came up empty-handed again, as Park Dong-won popped out to third and Lim Byeong-uk went down swinging.

The Twins made the Heroes pay dearly for those missed chances.

Kim stepped up with one out and men at second and third in the top fifth, and lined a double to left-center to open a 3-0 lead.

The Twins weren't done, as they put up two more runs on the board in the sixth.

Kim Sang-su, who relieved McGregor to begin the sixth, gave up a single and a double to the first two batters he faced. He then threw a wild pitch in the dirt to let in the Twins' fifth run. Chung Sang-ho then hit a sacrifice fly to left for a 6-0 advantage.

Another Twins' rally started with Kim Yong-eui's bat. He led off the seventh with a single, and came around to score on Park's single.

Park chopped one at shortstop Kim Ha-seong, and the ball took a funny hop and bounced over his head for an RBI hit.

It was all the support Sosa needed. The Dominican right-hander scattered eight hits across six scoreless innings. He struck out four and issued just one walk on 110 pitches.

Nexen starter McGregor was lifted after getting charged with four earned runs on five hits in five innings.

The Heroes tried to eke out a run in the bottom of the eighth, when they managed to get men on the corners with two outs. The best Park Dong-won could do was ground into a force out, and the Heroes bowed out without a run despite outhitting the Twins 11-9. 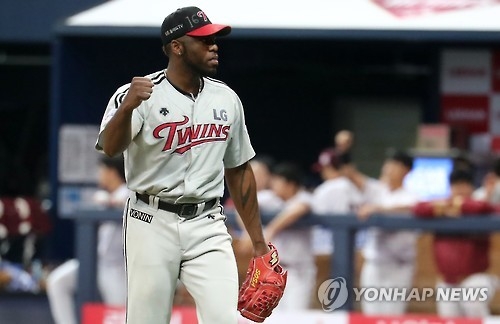