The Twins blanked the Nexen Heroes 7-0 on the road at Gocheok Sky Dome in western Seoul, taking the first game of their best-of-five first round series. And Kim Yong-eui, hitting at the top of the deep lineup, went 3-for-4 with two RBIs and three runs scored.

Kim got the Twins' first hit and scored the first run of the game, both coming in the bottom of the first inning. He hit a hard single off the glove of diving shortstop Kim Ha-seong and came all the way around on a groundout by cleanup Luis Jimenez.

After the Twins escaped a couple of bases-loaded jams while nursing a 1-0 lead, Kim gave his club more breathing room in the fifth. He came to the plate with men at second and third in the fifth, and sent a double to left-center gap to bring home both runners.

Kim then scored for the second time on Park Yong-taik's single. 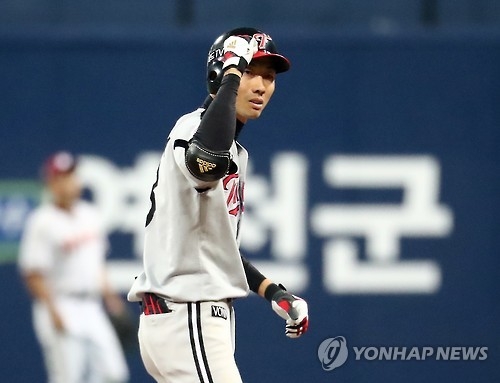 The two combined for another run in the seventh, with the Twins now leading 6-0. Kim opened the frame with a single and was sacrificed over to second.

Then Park bounced one over the head of shortstop Kim, and the Twins' Kim sprinted home for a 7-0 advantage.

Kim was lifted in the bottom of the seventh in favor of Ahn Ik-hun, and all the damage had been done on the Heroes' pitching.

It was Kim who put the Twins this far in the postseason. They defeated the Kia Tigers 1-0 to take the wild card Tuesday, and Kim came off the bench to deliver the winning run in the bottom of the ninth with a sacrifice fly.

Kim was named Player of the Game, and he said after the game it was the first meaningful award he'd won in his six-year career.

Kim batted .318 in the regular season, the first time he'd gone over the .300 mark. After struggling with a .247 average in the first half, Kim batted at a .345 clip after the All-Star break.

He credited teammate Park Yong-taik's advice with the impressive turnaround.

"After he gave me some technical tips, I started swinging the bat better in the second half," Kim said. "I'd been trying to stick to my own ways, but I decided I needed to make changes."

Kim added he entered the postsseason with his confidence running high, saying, "I felt I could get the job done as long as I keep doing what I've been doing all along."

Kim's and the Twins' productive day was in stark contrast to the Heroes' inability to cash in with runners in scoring position.

It was the recurring theme of the evening -- the Twins kept bringing home runners while the Heroes kept stranding them as highlighted by their wasting of bases-loaded opportunities in the first and fourth innings.