SEOUL, Oct. 13 (Yonhap) -- The LG Twins' right-hander Henry Sosa had never fared well against the Nexen Heroes in his five Korea Baseball Organization (KBO) regular seasons, but he put those struggles behind him in a solid postseason outing versus the same opponents on Thursday.

The Dominican pitcher threw six shutout innings as the Twins beat the Heroes 7-0 to open their best-of-five first round series at Gocheok Sky Dome in Seoul. He struck out four and walked one.

He escaped two bases-loaded jams unscathed and the offensive gave him more than enough run support in the comfortable victory. Sosa touched 157 kilometers per hour (97.5 miles per hour) with his fastball, and mixed it with curves, sliders and splitters.

The Twins, though, had used up their two best starters, David Huff and Ryu Jae-kuk, to knock off the Kia Tigers in the wild card series this week, and had to task Sosa with winning the ever-important first game of the series on the road. 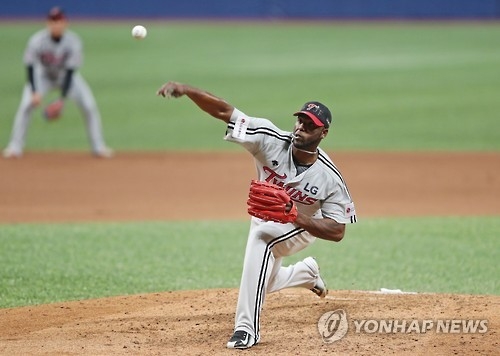 The Twins spotted him a 1-0 lead in the top of the first, but Sosa looked shaky in the bottom half of that inning, issuing a walk and two straight singles to load the bases.

Sosa then induced an inning-ending double play off the bat of Kim Min-seong and got out of the inning on 19 pitches.

With the Twins holding on to a 1-0 lead the Heroes loaded the bases again in the fourth on three singles.

Sosa battled Park Dong-won to seven pitches and got him to pop out to third. Lim Byeong-uk also worked Sosa to seven pitches, but went down swinging for the inning's final out.

The Twins' offense finally gave Sosa some breathing room, putting up a three-spot in the fifth and two more in the sixth.

They scored another in the top of the seventh, and the bullpen took care of the rest to hand Sosa his second postseason victory.

"The better we do, the longer we stay in the postseason, and everyone is trying to do their best right now," he said. "I am ready every day if they want me to pitch."